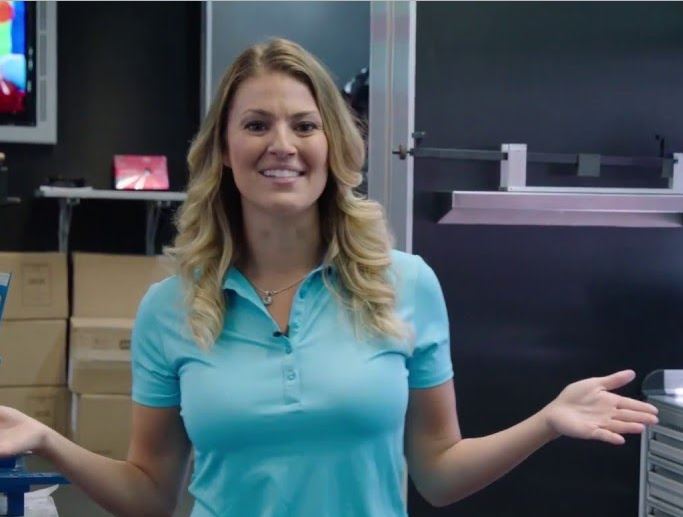 Amanda Balionis is an American popular sports reporter who dedicated her reporting work in the field of golf. She also worked for PGA Tour Digital prior to joining CBS. At present, she serves as a golf reporter for the CBS network. Her reported work on the network is one of the most important segments.

Amanda first began as an intern for CBS before joining the network as a reporter. During the time period, she also worked for a local newspaper serving as a reporter.

Just trying to be like @hallyleadbetter 🤷‍♀️ looking forward to a great final round in Memphis, see ya’ll at 3pm ET on @cbssports

Amanda Balionis was born in the year 1987, 20th June in Pittsburgh, Pennsylvania which makes her nationality an American. Balionis was very interested in sports from an early age as she came from a golf-obsessed family. As a matter of fact, she also started playing volleyball from her high school. She went to  Manheim Township High School after which she received Broadcast Journalism degree from Hofstra University in the year 2008.  During her University years, she was quite very active and was engaged in local WRHU radio station, The Chronicle student newspaper and the Association for Women in Communications.

#HappyWomensGolfDay ! . . . This sport has been in my life since I was teeny tiny but I've only now begun to understand and appreciate the kind of doors it can open and the relationships you can build on the golf course (or in the hitting bay 😜) that will last a lifetime ❤️ My advice for anyone who wants to start to play but may be too intimidated: go out and have fun with NO expectations. Enjoy the beauty around you and the people you're with. Learning the rules and etiquette and fundamentals will come, but the most important thing is to just have fun and not take yourself, or the game, too seriously.

After already being engaged in report and broadcasting in her University, Amanda continued thriving in the industry. Initially, she worked as an intern for CBS, and ABC News and many other local newspapers and media channels. After which she started working as an employee in local Lancaster Newspaper from the year 2008-2009. She hosted an online segment where she produced and edited sports segments. Shortly after her TV career started as she became a Sideline Reporter for the MSG Network as she covered some high school volleyball and sports segments. Later in the year 2011, she joined PGA TOUR where she continued working for around 5 years. Finally, in the year 2017, Amanda got a job in the CBS network as the part of the CBS Sports golf team.

I'm pretty sure every day is #nationalselfieday on Instagram.. but who am I to judge a gratuitous opportunity to post a selfie in my favorite uniform 😜 looking forward to getting back out there with the @cbssports golf team next week in D.C. !

Amanda Balionis is surely one beautiful reporter who is also very passionate about golf and sports. No wonder she has a good male fan following. As far as her personal life and her boyfriend are concerned, the reporter knows how to maintain the mystery. Balionis was previously speculated to be engaged to her “secret boyfriend” as from her social media posts but all of this was only a rumor.

So, is Amanda Balionis dating anyone? It is still a big mystery. As she talks little of her private life even on social media sites, a lot of her fans are eager to know if she has a boyfriend or not. But Balionis never confirms anything on her part which has made it a big question mark.

Amanda Balionis might not be a new name to those who are into golf. As she regularly appears reporting golf matches on TV screens. While on the other hand, Amanda confessed that she would love to report for football matches besides golf. There is no information regarding her salary and income, as a matter of fact, her net worth estimation is a mystery as of now.

Impossible to be blue in a little black dress 💙🖤

Well friends, we have a heck of a leaderboard shaping up for the weekend @MemorialGolf …looking forward to ALL of the action on @CBSSports beginning at 3pm ET #Rory #Tiger #Phil #OHMY