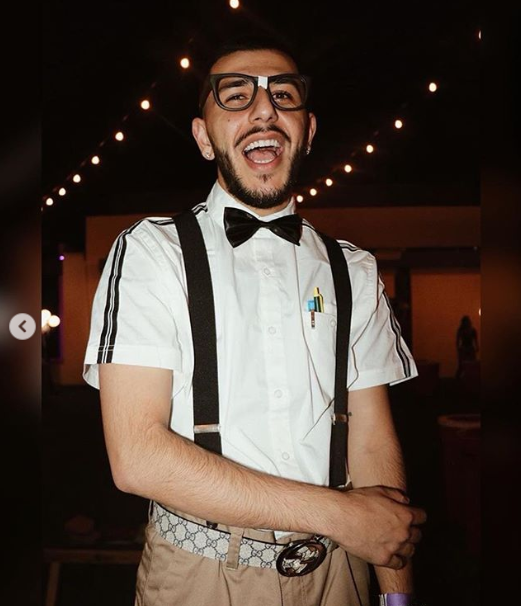 Brandon Awadis is an American YouTuber who is famous for his reaction videos, pranks, vlogs, and many challenges. He has regularly been posting fun content on his channel “Brawadis”. The young chap is also an aspiring NBA analyst who likes to talk about the game in his different channel “BrawadisNBA”. Awadis is a lucky man in the sense that he comes from a family of internet celebrities. He has a brother Faze Rug who is equally, if not more famous on YouTube.

Today, this young man is one of the most famous names on the internet. He has over 3 million subscribers who just love him to death. This has helped Brawadis gain a significant success and it is increasing every passing day. Let us now get to know more about this charming, witty and a fun-loving man.

Brandon Awadis was born on the 23rd of June, 1995, in San Diego, California. Very little information is available regarding his parents, however, he addresses them as Papa Rug and Mama Rug on his videos. Awadis is American by nationality and belongs to a mixed ethnicity.

HAPPY BIRTHDAY TO MY LIL BRO @rugfaze ✊🏼 I LOOK UP TO YOU EVEN THO YOU’RE YOUNGER 💜 KEEP DOING BIG THINGS, KEEP INSPIRING THE YOUTH LIKE YOU DO, PROUD OF ALL YOUR ACCOMPLISHMENTS BROTHA 😬

For his education, Brandon went on to study Journalism emphasizing on Media Studies. However, from a very young age, he was an aspiring NBA analyst and many of his videos today show his love for the game.

Brawadis was massively influenced by his brother Brian Awadis to join YouTube. According to Brandon, Brian inspired him to start making videos on YouTube and what a great decision it turned out to be for him. Today, he is embarking upon this journey full-time and is regarded as one of the best creators on the platform. His videos have gone on to attract over 10 million views which is extremely impressive for a 23-year-old. Brandon is full of really interesting and entertaining content and he is just an amazing personality.

Most of Brawadis’s videos are mostly comprised of challenges, social experiments, vlogs, and comedy. To this date, the most viewed video on his channel remains the Insane Burning Yeezys prank which has over an astounding 7.5 million views. He usually features his brother on his videos and plays pranks on him too.

Looking at Brandon’s personal life, he comes from a family of YouTube stars. His mother Mama Rug is also a famous YouTuber and was born on the 12th of January, 1964 in Iraq. Next, his brother, who has been one of his biggest sources of inspiration was born on the 19th of November, 1996 and is a year younger than Brandon. Brian is if possible more famous than his older brother and his video Cocaine Park has over 14.9 million views.

I asked her to marry me in the 2nd pic, she said yea, see y’all at the wedding 🤗

Now coming to his love life, Brandon was previously in a relationship with Jackie Figueroa. Jackie has also made several appearances on Brawadis’s videos. They began dating in January 2016 and but sadly it all came to an end in 2017. His current relationship status is unknown and it is not certain if Brandon has moved on.

Brawadis: Net Worth and Social Media

Brandon began his channel when he was only 20, on the 3rd of April, 2015. He has come a long way since then and is massively popular on the platform. Today he makes almost somewhere around $40k from his videos in a month and his yearly income is over $500,000. He is being followed by almost 3 million subscribers and sources tell that he has a net worth of $1 million.

Prayed then I prayed again 🙏🏼

Brandon is also massively famous on social media platforms. He has just over 1 million people following him on Instagram and people just cannot seem to get enough of him. Whereas his YouTube account has over 3.1 million subscribers and the numbers just keep on rising.