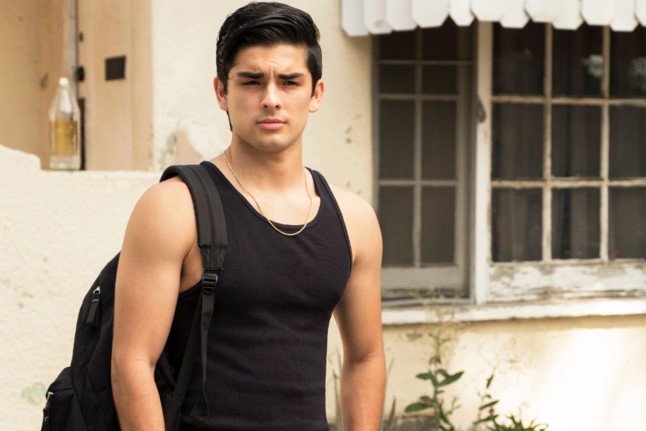 An American actor, Diego Tinoco, is mostly known for his role as ‘Cesar Diaz’ in a ‘Netflix’ series called ‘On My Block‘. Other than that, he is popular for playing ‘Marco’ in ‘Drizzle of Hope’, ‘Diego’ in ‘Welcome to Valhalla’, and ‘Mateo’ in ‘Teen Wolf’.

Prior to his success, he was rejected a couple of times and he worked at restaurants for a long time. Though he believes he was lucky enough to get a show real soon, he did struggle before his fame.

Tinoco was born on 24th of November 1997, in Cincinnati, Ohio to Morelia Michoacan (Mexican father) and Quito (Colombian mother). Speaking of education, he went to ‘El Segundo High School’.

Though there isn’t much that spoke or revealed about himself, in one of the interviews, he said that as a kid he had a skin condition called ‘Vitiligo. He added, kids at his school would bug him and bully him for the condition.

Moreover, he said he’d put on full sleeve shirts to cover it up even when it’s 100 degrees and what not. So, due to the fact that kids of his age bullied him, Tinoco stayed away from them and hung out with the older crowd. He said they didn’t care about the condition and it didn’t matter to them as much as it did to his generation.

Tinoco’s dreams of growing into a professional actor started at a really young age. As confirmed my trusted sources, he flew to Los Angeles for the first-ever meeting with an agent when he was just 11. However, it didn’t go as planned and he had to try again at the age of 16. And this time, he landed on a role as ‘Cesar’ in Netflix show called ‘On My Block’.

Before this, he went to several auditions missing out school and not doing so great with grades. He did some short roles in between; he played as ‘Marco’ in ‘Drizzle of Hope’, ‘Mateo’ in ‘Teen Wolf’, and ‘Diego’ in ‘Welcome to Valhalla’. Also, during the interval, Tinoco worked different jobs: at Postmates, restaurants, and what not.

After his breakthrough with ‘On My Block’, his career gradually began to take a shape. Speaking of his upcoming movies, he’s about to play a lead role in the Netflix movie called ‘Mourning War’.

Prior to his role as ‘Cesar’, the 22-year-old actor confirmed that he had a girlfriend. However, during his struggle phase, he told that they broke up, and now, they don’t see each other anymore.

So, in one of the interviews, Tinoco said he’s single at the moment and trying to focus on his professional life rather than dating. Also, he said he’s gonna stay single as long as he can. Speaking of his siblings, he has a brother who he grew up with. Apart from that, the young actor decided to keep a tight lip on everything.

One of the genuine sources suggests that Tinoco’s net worth is around $200,000. His source of income would be his TV shows and short movies. According to different sources, ‘On My Block’ pays Tinoco around $10,000 per episode. To calculate, there are 2 seasons of 10 episodes each. So, that makes $200,000.  Speaking of the cars, it looks like he owns a BMW 440i Gran Coupe Sedan. It costs around $60,000 US.

Furthermore, Tinoco is pretty popular on social sites as well. He has around 1.6 million followers on Instagram and about 131k on Twitter. People believe that his social sites are one of his sources of income as well. However, there’s no confirmation about this!

– Speaking of actors, Tinoco loves Leonardo Dicaprio, Johnny Depp, and Al Pacino. In one of the interviews, he said that Dicaprio inspired him to become who he is today.2.

– Talking about his favorite sport, he likes skateboarding and loves to perform tricks.

– His favorite foods would be Pizza, Roseberry, and Cookies with chocolate chips.

– His favorite movie is Departed.

– If he had gotten a chance to play in any series, that would be ‘Riverdale’, ‘American Horror Story’, ‘Narcos’, ’13 Reasons why’, ‘La Casa De Papel’, and ‘Stranger Things’.

– Some of his favorite restaurants would be ‘Woodranch’, ‘Broken Yolk, and ‘In n Out’.

–  Tinoco aspires to be a musician one day.