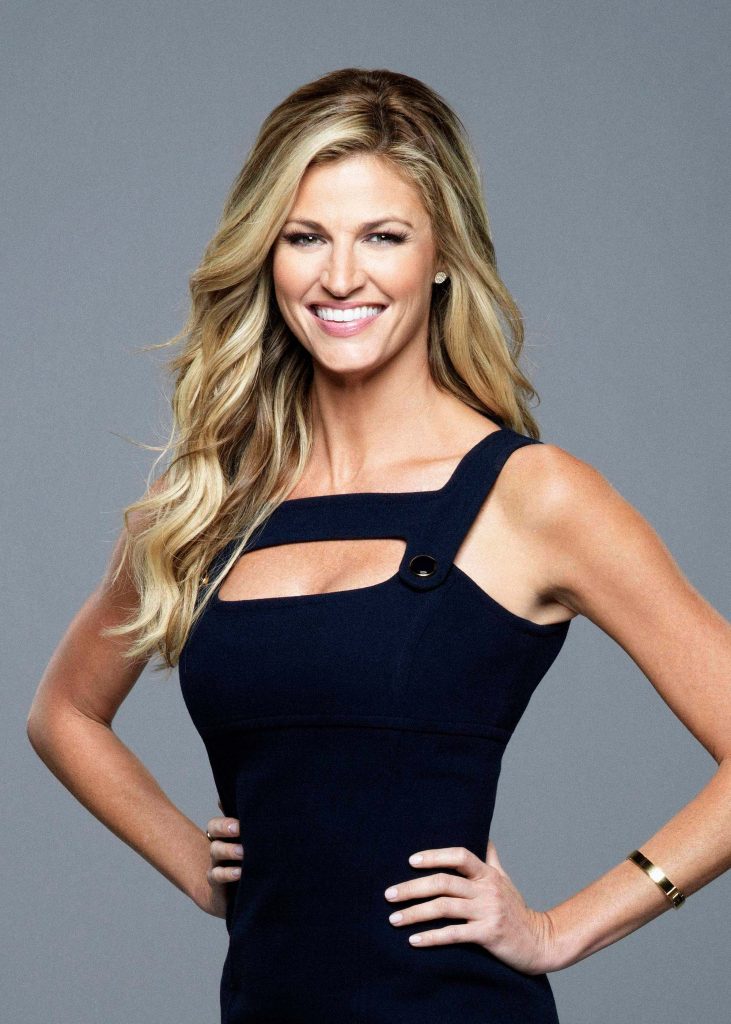 Tags: abc dancing with the starsanchorfoxhostJournalistreportersportscaster

Erin Andrews is an American journalist and an anchor who is currently the host of ABC’s “Dancing with the Stars.” Andrews is also a sideline reporter for FOX NFL and the daughter of a six-time Emmy Award-winning father. From a very young age, this self-described tomboy has always valued sports and cites its a quintessential part of her life.

Growing up, maybe with the influence of her father, Erin just loved to watch NBA games. She was also a big fan of Boston Celtics. Figures like Hannah Storm, Melissa Stark, and Lesley Visser, who were all famous sportscasters were figures of inspiration for this beautiful lady. Let us now get to know more about her.

Erin Jill Andrews was born on the 4th of May, 1978, in Lewiston, Maine. She was born to parents Steven and Paula Andrews. While her father is a six-time Emmy award-winning journalist, her mother Paula was a teacher. Erin also has a younger sibling, a sister, Kendra who is an actress and a dancer. The Andrews family later relocated to San Antonio when Erin was only 5 years-old. They again moved to Valrico, Florida when her father got a job as an investigative reporter for NBC Network.

#FBF To @disneycruiseline #Oceanic. @kendraandrews was making friends, my Dad’s stache was on point, loved my Mom’s shirt, and I had Bieber bangs #bigredboat #captainron ❤️

For her education, Erin went to the Bloomingdale High School in Valrico, Florida. Whilst her time at the institution, she was a member of the dance team, student government and also National honours Society. She next went on to join the Brandon School of Dance Arts in Seffner, Florida. After graduating from her school in 1996, Andrews got herself enrolled at the University of Florida. From the institution, she went on to receive a Bachelors of Arts in Telecommunications in 2000.

After graduating from the university, Erin was able to land herself a job at Fox Sports Florida as a freelance reporter. In 2001 she began working with the Sunshine Network as a reporter and a studio host. She spent 3 years at the network while covering the Atlanta Braves and Atlanta Hawks.

HUGE fan of this gem @alvinkamara @saints…Now if you want a pair of comfy boots and blazer to also be a fan of (nice transition), check out @people_style #NFLStyleDiary Week 13 @ragandbone @stuartweitzman 🏈👢❤️

Next, in 2004, Erin was able to land herself a massive job at ESPN, a leading network for sports. She was the reporter for the network’s National Hockey Night. After having spent over 8 years at ESPN, Erin sought out a new challenge. She then joined Fox Sports and was the first host of Fox College Football show. Erin even replaced Pam Oliver as the sideline reporter for the network.

Later in 2014, Erin became the co-host of the TV show “Dancing with the Stars”. Whilst doing so, she replaced Brooke Bruke-Charvet and her arrival on the show has been a massive boost to the ratings. Before joining as the co-host, Erin was even among the contestants on the 10th season. She was alongside partner Maksim Chmerkovskiy and ranked third on the show.

This beautiful TV personality is a married woman. She has been together with the professional hockey player Jarret Stoll from the December of 2012. The two later got engaged in 2016 and were officially married in the 24th of June, 2017. As of yet, the couple does not have any children but they do share a dog- a golden retriever called Howard.

Best part of this whole picture..we’re so happy we were finally seated after waiting for 2 hours 😍🌈🍗 📷: @ashleyphipps7 (oh this is hot)

Sometime before her wedding, Erin revealed that she was diagnosed with cervical cancer. However, she was able to get the appropriate treatment with two surgeries. She is now free of cancer and we couldn’t be more thankful.

Erin Andrews: Net Worth and Social Work and Media

Erin is one of the biggest names in the industry and it was not by any means an easy job to do so. She has come a long way and now with the hard work demands incredible respect and a massive salary count. Despite receiving an award for journalism like her father, she is right there among the best and she has an impressive net worth to show for it. As of today, Erin has a net worth of $20 million and sources tell that she makes $2 million every year.

Erin has also been actively helping people who are in need. She took part in the Kraft Foods’ Huddle to Fight Hunger Campaign. The campaign had a goal to raise $2.86 million to feed the needy in America. She has also been encouraging women to take part in sporting activities and led an initiative called “Girls Night Out” in 2011.

Thank you @forty4concierge for getting the kid 🐶 home! @stolly28 @nthompson44

You can also find Andrews on her social media platforms. She is hugely popular and has a massive fan base with 913k people following her on Instagram and 2.88 million on Twitter.