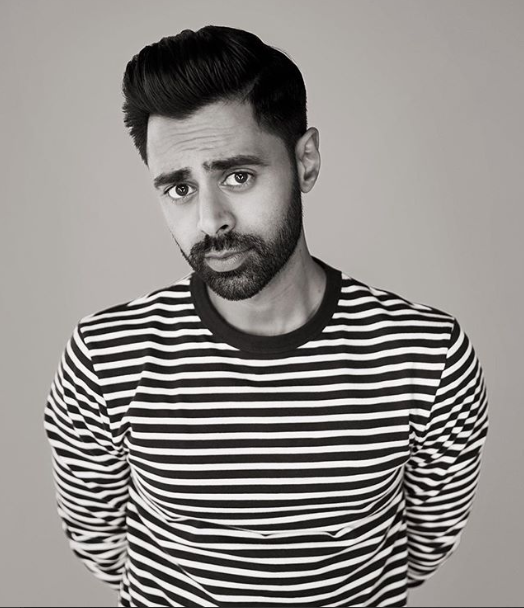 Hasan Minhaj is an American actor and a comedian who is currently a Senior Correspondent for “The Daily Show.” Minhaj was also a regular face on the sitcom “State of Georgia.” This young comedian in such a short time has been able to make waves with his amazing sense of humour and attitude. Hasan has also landed several guest roles in shows like “Arrested Development” and “Getting On.”

Minhaj first came to the industry with an outstanding performance in a comedy show “Homecoming King”. It was then that we knew this lad was heading for something big and he has not disappointed us. Minhaj was also honoured as the speaker for the 2017 White House Correspondents’ Dinner. He used this illustrious platform to roast Donald Trump and referred to him as the liar in chief. For his relentless contribution to comedy Hasan has been able to land himself special mentions in publications such as “The New York Times” and “The Huffington Post.” Let us now get to know more about this versatile personality.

Hasan Minhaj was born on the 23rd of September, 1985, in Davis, California. Minhaj belongs to a Muslim family who was originally from Aligarh in Uttar Pradesh, India. He was born to parents Najme Minhaj who was a chemist and Seema Minhaj, a homemaker. Hasan also has a sibling, a sister Ayesha Minhaj who is an attorney. She graduated from the University of California, LA with a bachelor’s degree in political science. She even has a Doctorate in Law from the University of Pennsylvania Law School. Hasan’s parents were the first generation of the family to immigrate to the different land and it was clearly before the birth of the comedian.

Looking at his academics, Hasan went on to join the University of California, Davis with a major in political science. Whilst studying at the University of California, Minhaj was ever so fascinated by comedy and it’s power. He also became a huge fan of Chris Rock and his performance on “Never Scared.” Minhaj then went on a solo journey to San Fransisco to pursue a career in comedy. He was heavily influenced by figures like Arj Barker and Kevin Shea.

Hasan’s career was off to an amazing start as he took the award for Wild 94.9’s Best Comic Standing competition in 2008. His award-winning opening act was followed by some of the biggest names in the industry like Katt Williams, Gabriel Iglesias and Pablo Francisco. Next, Minhaj began working as a part-time writer for a website called Ning. Whilst working for the website, Hasan was assigned with the role of comedy content creation. However, Minhaj was not the one to settle and soon moved to Los Angeles in search for better opportunities. He did find a better opportunity in the city of Los Angeles with an immediate gig in 2009 to perform on NBC’s Standup for Diversity.

After the completion of the show, Hasan made it as a finalist and the path was all laid out for the newbie. He then landed an amazing role in the TV sitcom “State of Georgia”. It was a huge success and Minhaj earned loads of praises from his fans and critics alike. His next stint came in 2011 for the MTV hidden camera show “Disaster Date”. Through his amazing performances, Minhaj was able to boost the ratings of MTV. Minhaj has also made several notable appearances for shows like “Watsky’s Making an Album”, “Arrested Development”, “The Legend of Neil”, and “Money from Strangers.” His stand-up special “Homecoming King” also has a lot to do with challenges of growing up in an immigrant family in a predominantly white town. For many who did not notice, it also represents his teenage infatuation, Bethany Reed. The two became friends from MSN Messenger and Bethany soon was the crush of Minhaj. However, the story was a devastating one and led to the heart break of Minhaj.

Hasan joined the famous talk show, “The Daily Show” in 2014 beginning as a correspondent. Now, the correspondent has completed over 100 shows for the network and is constantly on the rise. His ability to find humour in the most unlikely places is second to none. Together with Trevor Noah, Hasan was creating waves in the world of comedy and it was unlike anyone had ever seen. In 2016, Minhaj appeared as the host for the annual Radio and Television Correspondents Dinner.

The stakes have never been higher on the latest episode of Patriot Act. #NowStreaming

These successful roles made way for a giant one where he had to face a tough crowd of politicians and journalists. Yes! he was the host for the 2017 White House Correspondents Association dinner in Washington D.C. Sadly president Trump was not able to make it but Hasan was not going to let Donald Trump escape that easily. The comedian roasted the president among thousands of people. The room was full of Democratic, Republican leaders and many journalists. And he did not leave anyone behind with his humorous and often edgy jokes.

Man oh man. I’m gonna miss this dude. @trevornoah made me a better correspondent, standup comic, and connoisseur of Nando’s. The past 3 years have been an honor my brother. 🙏🏾👊🏾🙏🏾 📷: @ruminasean

The man of many talents is also behind the famous voice of Rabi Ray Rana. It was for the game Far Cry 4 which came out in 2014. For his work in the game, he got nominations for a Behind the Voice Actors Award for Best Vocal Ensemble in 2015. In 2013, Hasan was also the host for the Stand Up Planet which was sponsored by Bill and Melinda Gates Foundation. Minhaj often likes to bring his experiences from the past into his comedy routines.

Hasan Minhaj: The Best of Hasan

1) A compilation of Hasan’s best work for “The Daily Show.”

There have been many rumours questioning the sexuality of this charming individual. Most of it comes from the fact that Hasan has been publicly advocating for the rights of the LGBT community. Minhaj wrote a letter to academic Reza Aslan to fellow Muslims where he encouraged people to support the legalization of same-sex marriage. It might not be the most Islamic thing to do but the right choice for Hasan. He has been supporting the LGBT community and stands together with the marginalised community.

The rumours suggesting that Hasan is a gay man could not be further from the truth as he is happily married to his long-time girlfriend Beena Patel. The two first met in college and instantly fell for one another. As Beena came from a Hindu family there were obviously some problems. However, in 2015, the two broke the barrier created by society to marry his love.

Beena is a UCLA graduate who has a Doctorate of Public Health. She is currently working as a management consultant at MedAmerica. Patel was previously working in La for the welfare of the homeless patients. She hopes to work for the betterment of care and quality these patients receive.

For a 32-year-old Hasan has been able to accomplish quite a lot. He has also been able to move away from the social stereotypes and is one of the biggest names in comedy. The young comic is still landing some of the most amazing roles in Hollywood. So we are sure to see a lot more from him. Minhaj’s career though a short one has been an illustrious one, He has even been able to meet all the expectations people had of him. As of 2018, Hasan has a net worth of $4 million and the figures are on the constant rise. Minhaj makes most of his money from his work in comedy. He has been able to land many roles in movies, tv shows, and various stand-up shows. Minhaj also earns a lot from product endorsements.

Hasan has been a prominent member of the industry. There is just something about him that sets him apart from most comedians. He has been in this field for some time now and still possesses the same desire to perform to the fullest. He is also a pretty active member in the social media community and remains a beloved figure among his fans. His personal account on Instagram goes by the handle hasanminhaj. He has over 511k followers on the platform with people queuing up to see more of his work. Minhaj’s Netflix series Patriot Act has a separate account and has over 43.9k followers. Hasan is also famous on Twitter where he has just over 325k followers. He uses these platforms to engage with his fans, promote his work, endorse products which end up paying him a good deal of money, and share personal life among his fans.