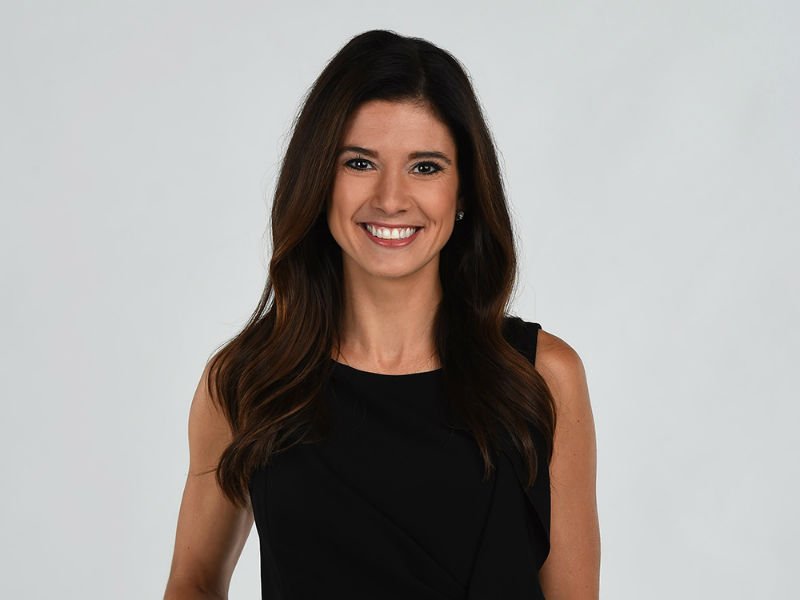 Jen Lada, an American ESPN sportscaster who has managed to gain the fame as one of the faces of the network. She primarily appears on the College GameDay and College Football Live. Further, she has also contributed to work in the shows like ‘Mike and Mike’, ‘Baseball Tonight’, and ‘Sportscenter’ as well.

Moreover, some of her memorable stories include ‘Heart of a Tiger’, a piece on organ donation by Auburn and LSU families. The story was able to earn College Sports Media awards for Outstanding Sports Feature. Additionally, there are some other stories that led her to receive a few prestigious awards. Let us together dwell on her further information on topics like relationships, net worth, and body measurements.

#fbf to 2011 when I definitely had SEVERAL of those Express cardigans. 😬😬😬

Lada was born on 14 January 1981, in Chicago, Illinois, the United States. While growing up, she has spent most of her childhood days in Chicago then later she moved to Woodstock. She and her three siblings were raised by their parents. However, she has not revealed information on her parents and siblings.

Further, she completed her high school from Marian Central Catholic High School, Woodstock, IL. Later, she went to join Marquette University from where she collected her Broadcast Electronics. After that, she did a one-year non-paid sports internship and also minor part-time jobs like a waitress.

I’m on the left. 30 years have passed since this birthday celebration. Been almost as epic as my sweet sweater.

She initially started her broadcast journalism career as a reporter and anchor for WITI-TV in Milwaukee. During her time on the channel, she has received the Best Sportscaster first place in 2011 by Wisconsin Broadcasters Association. Also her story on Milwaukee woman who ran across the US to raise awareness for Multiple Sclerosis’, has got the Best Feature first place by the Milwaukee Press Club. Then she left to work with WREX-TV in Rockford.

After that, she has also worked as an anchor and reporter for two and a half years for Comcast SportsNet, Chicago. Then she reported the news on Bears and White Sox pro sports beats at CSN Chicago. Then in 2015, she joined the popular network ESPN. Since then she had made a guest appearance on several ESPN radio and television shows. It includes Baseball Tonight and First Take.

College GameDay Lite 😏 Changing it up a little and presenting my Badgers feature from Camp Randall. Who ya got, WIS or MICH?

Lada has also hosted the SC Featured podcast featuring the audio document on short stories and interviews with the SportsCenter team. Since 2016, she is working as a feature reporter for the College GameDay and College Football as a host respectively.

Speaking about the 38-years-old personal life, then she is twice married and divorced once. Previously in 2006, she was in a married relationship to fellow Marquette graduation, Sean Reti. The ex-couple first met while attending the same University and eventually fell for each other. After their three years of marriage, together, they had greeted their first child, son Chase in 2009. However, there is no clear information on the date of their separation and reason as well.

For many of us, life always gives us a second chance to correct things and lived a new life. However, there are some who do not take a chance while some grabbed them and lived a happy life. The latter goes to this beautiful reporter who seized the opportunity and as a result, she is enjoying her current married life. During the fall of 2017, she tied a knot with former ESPN anchor Dario Melendez. Following the year in 2018, she gave birth to a lovely daughter, Layla.

The journalist who currently works for the popular network ESPN. Meanwhile, the network is known for paying its employee a good wage. ESPN pays its employee annually in the average of $51,000 or $25 per hour. Further, the network pays the highest salary at $124,000 annually while the lowest ranges up to $27,000. Therefore, according to the salary list, Our dear reporter earns $100 thousand annually, now we can guess what’s her position in the network. Further, her net worth estimates of around $1 million.

The gorgeous journalist has an attractive slim body that stands to a height of 5 feet 7 inches or 1.70 meters. Other than this, there is no information on her well-built body statics and weight. She has a medium-dark brown hair color with a pair of brown eye color.