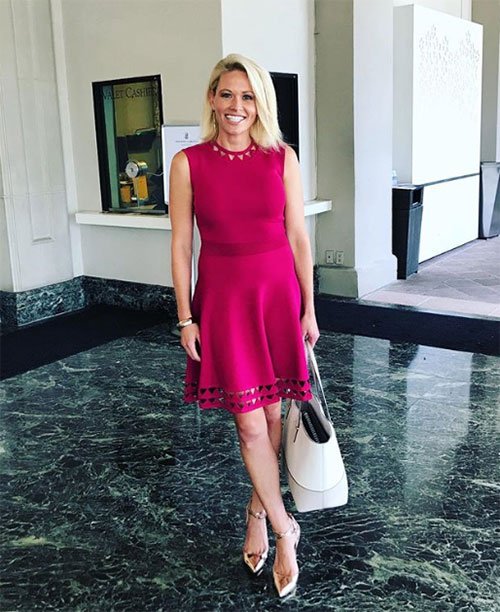 Lisa Kerney is an American sportscaster who is famous for her work with ESPN. She was also the host of Sportscenter alongside Jemele Hill, Sage Steele, and Kaylee Hartung. Kerney began working for the network since 2014 but she also did work for WCBS-TV and Metro Sports. Lisa as we know it is a beautiful human being who is also known for being kind and down to earth.

Lisa has been living her dream to the fullest and is regarded as one of the best journalists in America. She strives to do her work in a proper fashion and this is what separates her from other journalists. Lisa made her debut in this field in 2003 as an intern and boy has she come a long way since then. Let us now get to know a bit more about this amazing sportscaster.

❤️❤️❤️❤️ #momlife #paradise (real story: 3 of my 4 kids were crying in the making of this happy photo. 📸 cred: my 7 yr old…the only one not crying)

Lisa Kerney was born as Lisa Diaagne Gangel Kerney on the 8th of July, 1981, in Kansas City, Missouri. She was born under the birth sign Cancer and to her parents Barbara and Lou Gangel who raised her in Leawood, KS. Despite very little known regarding her early years, she is of White ethnicity whereas her nationality is American.

Now coming to her academics, Lisa went on to graduate from St. Thomas Aquinas High School in Overland Park, Kansas. She next joined Lynn University in Boca Raton with a major in Broadcast Communications. Whilst at school, she was the captain for the women’s basketball team, “The Pacific Tigers.” Her abilities on the court even helped her secure a scholarship for her education. While she showed her love for sports, she always knew that she would want to pursue a career in journalism and she could not have been more right.

After graduating from her university, Lisa then went on to join Metro Sports in 2003 as an intern. It was her degree in broadcast communication that helped her get the job. However, her first official work came for the Columbia Broadcasting System affiliate in Button, “KXLF”. After a brief spell with the network, she got a job of a sports anchor at WCBS-TV in New York.

Her next role came for KING-TV in Seattle from 2005 to 2010 where she was the weekend sports anchor. Kerney has left no stones unturned as began working for the Major League Baseball Network. However, her biggest role till date came in 2014 when she joined ESPN. It was a big break and all the hardships that she had gone through finally proved to be worth it. She has now gone on to receive several awards for her excellent work in broadcasting.

8 magical years with the man I love! You make me a better everything. I love you beyond words @patrick_kerney ❤️ Happy Anniversary my boo!

The beautiful Lisa is married to  Patrick Kerney, who is a former football player. They said their vows in 2010 and today Lisa shares 4 children with Patrick. Lisa first met the love of her life in 2007 when she was covering a Seahawks press conference. And 3 years later, their relationship of a reporter and a player had drastically changed into something beautiful.

Dear Fish, You’re welcome for all the extra rocks. We tossed them for an hour with love. ❤️, the Kerney kids

Coming back to her husband, Patrick was a defensive end who spent 11 seasons in the NFL. Like Life, he too played for his college team, but it was a football team for the University of Virginia. After his retirement, Patrick went on to enroll for an MBA program and the Columbia University. Lisa and Patrick are undoubtedly two busy people but they do make time for family.

Kerney began pursuing journalism since 2003 and she has come a long way since then. She has grown a lot professionally and as a person too. Kerney demands a huge respect in the business and a good paycheck too. As per sources, Lisa has a net worth of $1 million. However, her husband, Patrick, who is also a former NFL player has a net worth of $15 million. The family is living a luxurious life and we wish them all the luck.

Family fun. It’s a myth. You know that, right? As my husband notes (accurately)…either the kids are having fun OR the parents are having fun. Rarely both. Double true when you have four small children (6, 4, 3, 3 – the twins are the real wild card). No matter how cute they are. This was my expression on our way TO vacation…sly, mischievous, playful with my 4 yr old photographer (pic #2 is my version of excited…also still on the ferry. Clearly.)…little did I know we should have taken the next ferry back. 🤣 Hey, kids…wasn’t that fun?! That’s a wrap. Just saving us days of being out of our element and scrambling to keep it together. Nothing easy. Loading up the car every day with 8 bags of food, toys, towels, then lathering sunscreen for what feels like hours, someone complaining at all times only to get to the beach, forget something (inevitably) and then load everything back up an hour later to get home for naps or the bathroom. Repeat. I realize this sounds as though I’m crazy and ungrateful but…parents, am I right? There is truly no place like HOME. ❤️ With that said…of course we shared laughs and made memories (good ones too – here’s proof)…we just might hold off on another “family vacation” for 10 years or so. 😂 (And…for the record…I AM deeply grateful to have visited such beauty with the people I love the most in the world! 🙏🏻 #blessed) #familyvacation #nantucket #ciscobrewers @patrick_kerney @burkedei