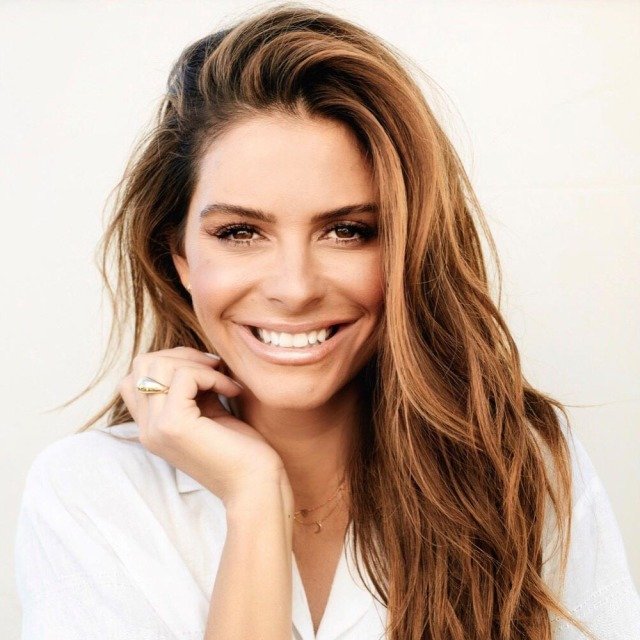 Maria Menounos, this name is one of the best example of leading and multi-talented lady. She is an American actress, journalist, and TV host. Also, served as an ambassador to WWE since 2013. Maria is seeing occasionally on WWE as a professional wrestler.

Menounos has started her journey in television in 2002 as a host. She has appeared as guest star in a different reality show with her husband also. She is also famous for being the wife of the online broadcast creator, Keven Undergaro.

The talented lady was born on 8 June 1978, in Medford, Massachusetts, US. She was born to a Greek parent Costas and Litsa Menounos. Maria grew up in Massachusetts along with her younger brother Peter.

Coming to her education, she has joined the Medford High School. Later in 2000, she graduated from the Emerson College in Boston. During college time, she has participated in the organisation called ‘Emeron Independent Video’.

Menounos started to work from her college days, where she was a reporter for Channel One News. At that period, she interviewed President George W. Bush and also traveled to report 2001 El Salvador earthquakes. In 2002, Entertainment Tonight hired her as a correspondent for entertainment news. Further, she has worked with “Access Hollywood”, “Today”, and so on. The veteran journalist became the first to interview the whole Obama family.

In 2005, Maria left the program to enhance her acting career. The same year, she debuted by the movie”Fantastic Four” as a love interest of character Human Torch. She has appeared in the movie “Kickin’ It Old Skool” as a major role ‘Jennifer’. Additionally, Bobby Lee was also the part of this movie. Menounos has appeared on the TV show like UPN’s ‘One on One’ as ‘Glenda’, ‘One Tree Hill’, and ‘Entourage’.

Maria is also a professional wrestler and made her debut in WWE in 2009. Also, host and guest backstage interviewer of the WWE. She has also co-founded the online broadcast “AfterBuzz” along with her husband. For her dedication and hardworking, she has achieved awards. Further, she has appeared in the magazines like FHM and People. In 2014, she won the Daytime Emmy award for Outstanding Entertainment News Program. Also won Madden NFL Pro-AM MVP award and Cyber Vixen of the Year on Spike TV’s video games awards.

Maria first met her long term boyfriend at the age of 17 while attending the Emerson college. Then after some meetings, their love started to bloom. On 9 March 2016, Keven proposed to Maria on live show of The Howard Stern Show. After a year later on 31st December, the duo tied a knot in Times Square in a ceremony officiated by Steve Harvey.

On 6 October 2018, the couple again held an orthodox wedding in Akovos. Further, Maria revealed that her family refused to accept the relationship with her Italian-American boyfriend. After that, Keven was only left by her side and helped her in every step. Additionally, in 2017, she has undergone surgery for meningioma.

The hard working and multi-talented lady has been in the industry more than decades. Maria is the Ceo and executive director of the online broadcast “AfterBuzz”. She has also appeared in severals movie and TV series. She has garnered a huge amount from her career. Therefore, her net worth has estimation of $7 million.

Besides, her endorsements and commercials also added profits on her net worth. She likes to wear the designer dresses of Gucci, Prada, Calvin Klein, and others. Moreover, she loves animals, especially dog. So, she has petted two dogs.

As a social media personality, we can also found her on Social networking sites. She is highly active and stays updated with her fans. She has handle @MariaMenounos on Facebook with the followers more than 44.500K. Likewise, on Twitter have 678K and have followers 1million on Instagram (@mariamenounos).