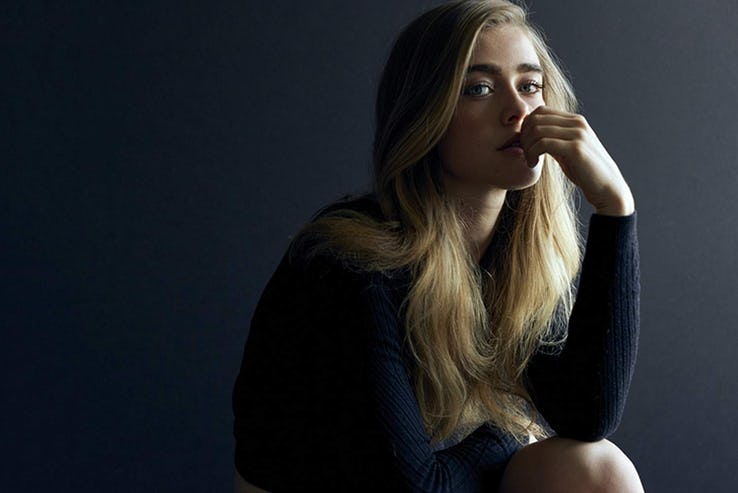 The 26-year-old actress, Melissa Roxburgh rose to fame the face of NBC’s Primetime show ‘Manifest’. Therefore, she quickly has garnered to have the title of NBC’s next generation primetime queen. She is a Canadian actress mostly known for her role in Diary of a Wimpy Kid: Dog Days and 2016 Star Trek.

At present, she is working in the American supernatural drama “Manifest”. She shared the screen with the actors like Josh Dallas, Athena Karkanis, and Joel de la Fuente appeared as the guest role of Dr. Brian Cardoso.

If you can’t tell, I really liked this dress 😐

Melissa was born on 10 December 1992, in Vancouver, British Columbia, Canada. She grew up in the religious influenced family and is the second child of four siblings. Roxburgh has revealed that her father is a minister and mother has played tennis at Wimbledon. Further, she prefers to live a low key life so she has only provided limited information on early life and education.

Keeping the homeless actor look alive since I was 4

Melissa started her acting career at the age of nineteen. She appeared as ‘Rachel’ in the American comedy film ‘Diary of a Wimpy Kid: Rodrick Rules’. Later, she played the role ‘Heather Hills’ in 2012 ‘Diary of a Wimpy Kid: Dog Days’. After that, she has played in a number of hit movies including Princess in ‘Big Time Movie’, Ensign Syk in ‘Star Trek Beyond’, and Azaria in ‘Last Solace’, many others.

She stepped into the television scene with the horror drama ‘Supernatural: Bloodlines’ along with Lucien Laviscount and Nathaniel Buzolic. After that, she was seen in the main role of ‘Thea’ in the American military drama ‘Valor’. The series aired from 2017 to 2018. Also, she starred in the episode of the series like ‘Sorority Murder’ and ‘Travelers’. At present, she is working in the lead role ‘Michaela Stone’ in the series ‘Manifest’ aired from 2018 to present.

Monday nights at 10pm! Can’t wait for everyone to see this show that we think is pretty special. . Trailer in Bio 🙂 ✈️

The Manifest actress seems to be secretive because only limited information is shared publicly. But her followers on Instagram has noticed her few photos with her fellow actor Andrew Jenkins. Both actors seem more than friends but both of the duos have not confronted about it and left behind to imagine on her posts.

Furthermore, Roxburgh met Andrew on the sets of ‘Lost Solace’ in 2016. After working together, they seem to have developed a friendly and close relationship. However, there was the speculation of being in a relationship. Unfortunately, there is no information on their current relationship or breakup.

Happy Birthday to this incredible human being <3 #andrewjenkins

She has been working in the entertainment industry for the past decades and still going strong. So, she has started to work as a minor and she plays the lead and strong roles in the dramas and series. Therefore, her net worth has an estimation of over $1 million. She has worked almost in high budget movies and dramas.

Sorry, don’t think I’ll ever figure this hand thing out

The beautiful actress has an average height of 5 feet 5 inches or 1.65 meters. Melissa’s body weight weighs to 54 kg and has a perfect slim body. Further, she has mesmerizing green eyes and blonde hair color.