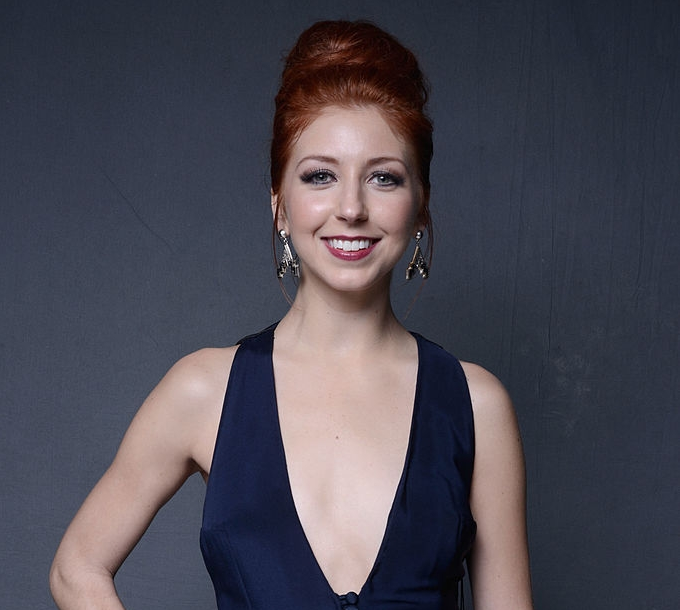 Morgan Smith Goodwin is an American actress. She has worked in the TV series “Boardwalk Empire” (2010-2014). Later in 2012, she got a chance to be the redhead spokesman of Wendy’s restaurants. Meanwhile, she has also her blonde hair into the orange for the commercial.

Since then, She got through the magazine’s articles and interviews. She also worked in commercials with Aaron Takahashi in 2013. Furthermore, Morgan was involved in many projects like Veep(2012) along with the actor, Kevin Dunn.

The talented actress was born on 18 August 1985, in Cullman, Alabama. She grew up in her birth town along with her parent and sibling. There’s not much information about her family.

Morgan from an early age has an keen interest in acting. So, through this passion of her’s, she enrolled in the Alabama’s Birmingham-Southern College. She pursued musical theater there. After graduating, she moved to New York City to make her passion into career.

She started her career after moving to New York City. In New York City, she has got the opportunity to work in many readings and concerts. Also, she became the original cast of the Off-Broadway production Freckleface Strawberry. She got to work in the short drama Circumstance in 2006. In 2011, she became part of the production of Sweet Charity in her hometown.

Goodwin’s career got a big break in 2012. when she was chosen to be the face of Wendy’s Restaurants “Now That’s Better” advertising Campaign. After featuring in the campaign she was known by the name “Red”. As she had dyed her natural blonde hair to the orange. Her campaign brought a lot of profit to the Wendy since the Dave Thomas advertising campaign in 1990.

After the campaign, she went to the Hollywood for gig audition. Goodwin also did a recurring role for the 5th season of Veep and other shows. Apart from acting, she also produced, wrote, and appeared in short comedy “Haygood Eats” in 2016.

Coming to Morgan’s personal life, She is a married woman. She met her husband Dave after moving to New York City for her further career. Dave Ridgway Goodwin is the manager of Gramercy Tavern, new American Restaurant of Danny Meyer. The lovebirds married in 2009 after dating for a while.

The couple is married for 9 years and still sharing a good bonding. However there 9 years of marriage has not planning to have a baby yet. Since they are enjoying their lives and maybe can hear about the baby anytime soon. Moreover, Like Lady Gaga, Amiyah Scott, she is also a supporter of LGBT.

From an early age, the talented actress has started to work in the industry. She used to do plays during her college days. After that, she has collected a huge tenure from Wendy’s Restaurants Campaign. She has helped Wendy to gain lots of profits. Therefore, her net worth is estimated to be $3 million.

She has racked up a net worth from lots of commercials and endorsements. She was nominated for Lucille Lortel Award. Goodwin has recorded Critic’s circle and Drama Desk.