Nick Buoniconti was an American professional football player. He played as a middle linebacker in the American Football League (AFL) as well as National Football League (NFL). He initially drafted by the Boston Patriots in the 13th round of the 1962 AFL draft. Later he traded to AFL’s Miami Dolphins in 1969, winning two Super Bowls. Additionally, in 2001, Buoniconti was inducted into the Pro Football Hall of Fame.

Furthermore, he was a member of the National Italian American Sports Hall of Fame. However, the veteran sports personality passed away at the age of 78 on 30 July 2019 in Bridgehampton, New York. The footballer had announced in November 2017 that he would posthumously donate his brain to aid CTE research. Let us scroll over to know more information on him. 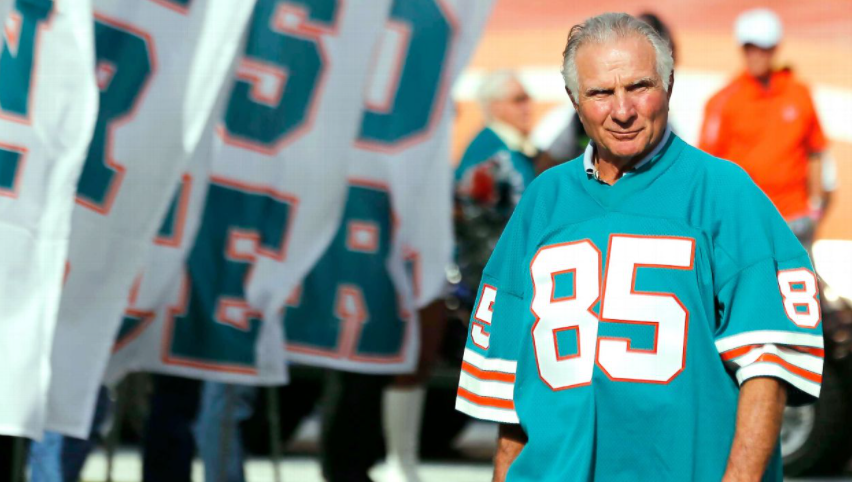 He graduated from Notre Dame and later drafted by the American Football League’s Patriots in 1962. He started to play from his junior years and was second on the Fighting Irish in tackles in 1960. Following that in senior years, he led as Irish co-captain with 74 tackles and rewarded with 2nd-team All-America Selections from UPI, TSN, and the Football Coaches’ Association.

However, the NFL considered him ‘too small’ to play pro football but in 1962 Boston Patriots drafted him in the 1962 American Football League college draft. He later switched to linebacker, soon then, he named as the team’s rookie of the year. In 1969, he traded to AFL’s Miami Dolphins and continued to play till 1976. He along with the team led to winning the Super Bowl games. His career ended with an unofficial 24 sacks, 18 with the Patriots and six with Dolphins.

After retirement as an NFL Linebacker:

Further, he had graduated from Suffolk University Law School with a J.D. degree during his play with Patriots. For a short period of time, he practiced as an attorney. However, he later presented himself as an agent after his post pro career. And he represented some 30 professional athletes including Bucky Dent and Andre Dawson.

He began to appear in television programs as well. He has appeared as a guest including Comedy Central’s Night After Night with Allan Harvey. Later, he became a co-host of a weekly cable television show ‘Inside the NFL’ aired on HBO till 2001. In 2001, he was inducted into the Pro Football Hall of Frame.

Unfortunately, his son Marc suffered a spinal cord injury in 1985 while making a tackle for The Citadel, leaving Marc with a quadriplegic. He met his second wife Lynn Weiss who is 12 years younger than him at a bar in 1995. It is believed that his separation from his first wife, due to the extra-marital affair with Lynn. In 2000, Lynn and Nick tie a knot in a private ceremony. Lynn owns a successful travel business and operates a French antique and gift shop as well.

Moreover, on July 30, he passes away at age of 78 before that in 2015 doctors told Buoniconti that she showed symptoms of dementia. Later, he openly shared that he struggled with neurological issues.

Talking about his earning, he accumulated a hefty amount from his career before his death. When he was alive, the main source of income was from a pro football career and later as a television personality. He had also worked as an agent representing several athletes. Therefore, he had a net worth estimated at around $4 million and above.

It seems that he does not possess any accounts on social media networking sites.

The late football player had an athletic body that stands to a height of 5 feet 11 inches or 1.80 meters. His body measures 100kg with unknown body measurements of chest, waist, and biceps. At the time of his death, he had a fair complexion with light hazel eyes color and silver hair color.