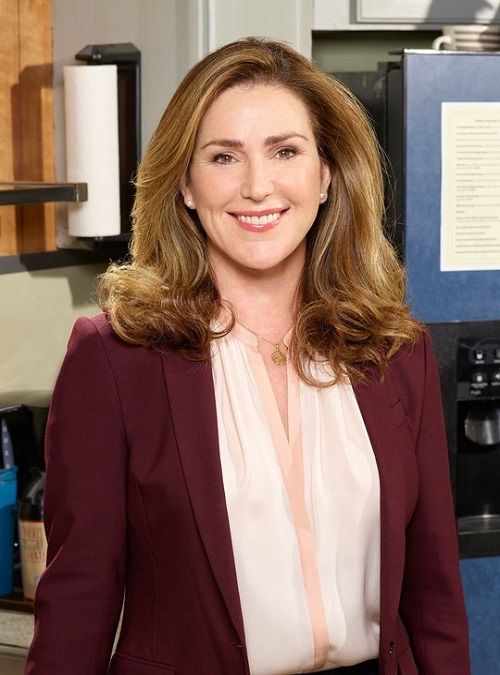 You might be familiar with the name Peri Gilpin if you have ever seen the TV series, Frasier. Gilpin played the role of Roz Doyle on the show and was brilliant at portraying a casual uncaring nature. Peri has come a long way from the time we saw her on Fraiser. She now is busy with many different movies and TV shows.

Gilpin is also famous for her role in the ABC Family Drama show ‘Make it or Break It’. Since her initial success, Peri has made appearances for several sit-coms and situational comedies like Cheers, Wings and Designing Women. Let us now get to know more about this beautiful actress.

Peri Gilpin was born on the 27th of May, in 1961. The Texas-born is of American nationality and has a mixed ethnicity of Croatian, English, German and Irish. Peri was born to James Franklin Oldham and Sandra Jo Hauck. She did not have the easiest of starts to her life as her parents split up when she was only 8. Her mother then got married to Allen W Gilpin Jr in 1969 and her biological father passed away after an accident while skydiving. Later her mother too died due to leiomyosarcoma.

Adam West was always my Batman. He made us laugh while we fought crime. POW💥 KABOOM⚡️UH OH! ☄️

Peri was extremely close to her stepfather and later she began using Gilpin as her surname. Gilpin has two sisters April and Patti Jo Wynne and a brother Marc.

Looking at her education, Peri went to join the Dallas Theater Center. From a very young age, she had an inclination towards acting. Later she enrolled at the University of Texas at Austin and then the British-American Academy in London.

Gilpin made her debut on TV on the show 21 Jump Street in and then Almost Grown, both in 1988. Peri then became famous for her portrayal in the TV series Frasier. The show began airing in 1993 and was on TV for just over 10 years. 2000 was a big year for her as she won a Screen Actors Guild Award. This gave her a lot of fame among the public and is responsible for increasing her fans.

Next, in 2009, Gilpin made her appearance on the ABC Family drama ‘Make It or Break It’. For the show, she was able to win Gracie Award for Outstanding Female Actor in a Supporting Role in a Drama Series.

You might even remember hearing her voice in the animated movie, Final Fantasy: The Spirits Within. Peri also gave her voice for “The Jungle Book: Mowgli’s Story’ in 1998. For the movie, she was the voice of Raksha the Wolf. Adding all of her work, she has been involved with 6 films and 27 tv shows.

Peri is married to her longtime boyfriend and a reality painter Christian Vincent. The wedding took place on the 31st of July, 1999, at Kelsey Grammer’s house. It was in presence of family and a few friends. Peri and Christian were longing to have children but they had to wait. As things did not go quite the way they wanted to, the couple had to resort to various treatments.

Later, the only option available to Peri and Christian was surrogacy. On the 7th of May in 2004, they finally had their dream come true as the surrogate mother gave birth to twin girls Ava and Stella. This event was able to overwhelm these two with joy and was the best feeling for them.

Christian and Peri have been together for over 18 years now and their bond is as strong as the day they first met. There were talks about the couple separating but thankfully they were all just rumors. These two lovebirds are currently living in Los Angeles with their kids and leading a joyous life.

Gilpin has been active in the film industry for decades now and has established herself as a prominent figure. Throughout her career, she has been able to showcase her talents as an actress, a voice artist, and a producer. This has given her an enviable position in the American film industry. And this success in her career has provided her with a massive net worth of $15 million.