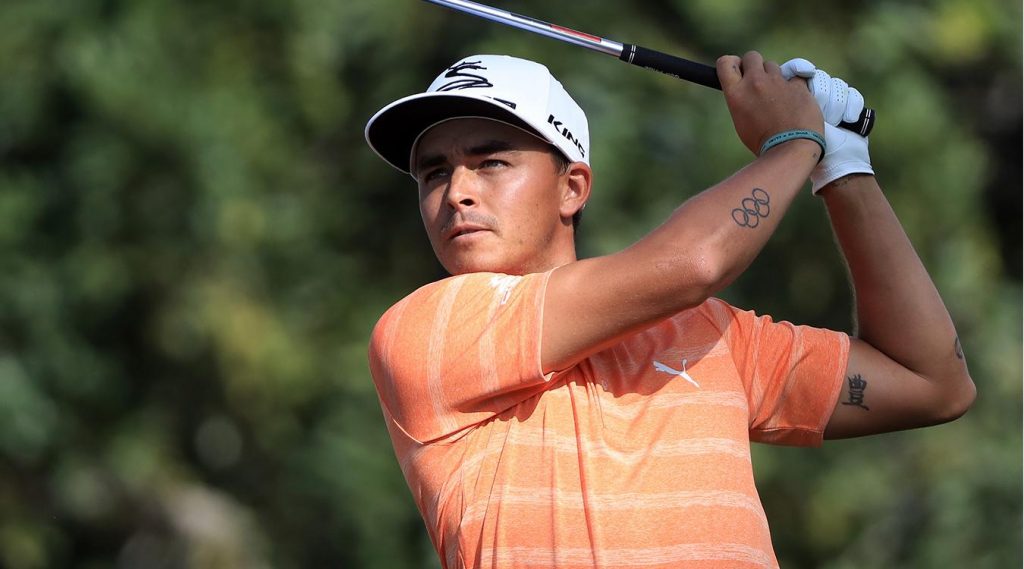 Rickie Fowler, like Sergio Garcia, is a professional golfer from America with four PGA Tour wins and two European Tour wins already under his belt. He had an equally amazing amateur career and was ranked top in the world, has retained the number one spot for 37 straight weeks. Fowler has also won the Western Junior Cup once and helped claim the Walker Cup twice for the US.

His professional career has been a glorious one. To name a few, this young American has won the Kolon Korea Open in 2011, The Players Championship, the Deutsche Bank Championship, etc. After his Abu Dhabi HSBC Golf Championship win, Rickie reached his career-high fourth place in the World Golf Ranking. As of yet, he has been able to register 8 top-5 major finishes. Let us now get to know more about this wunderkind of a golfer.

News got out last week that I was dealing with an oblique injury the past two tournaments…it was confirmed yesterday, via MRI, that I have a partial tear in my right oblique…my team and I feel like it’s best not to play next week in the Northern Trust…I will be back healthy and competitive ASAP for the FedEx Cup and more than ready for the Ryder Cup!!

Rick Yutaka Fowler was born on December 13, 1988. The Murrieta, California born kid was brought up by parents Rod, who owned a trucking company and mother Lynn. He alongside his sister Taylor grew up in a relatively well-off family who loved participating in bike riding games.

Rickie’s father was a dirt racer and for a while, he followed the same footsteps. However, he went through an accident while he was still at his high school. This forced Fowler to quit riding and then he started learning golf from his grandfather. In 2005, he won the Western Junior and then went on to win the 2007 Walker Cup for the US team.

Thrilled to share with my fans globally first-ever golf lessons in virtual reality and 2D video…learn MY tips and techniques that have taken me to the top of the game at www.successseries.com. Whatever level golfer you are, I can help you shave a few shots @SuccessSeriesVR #SuccessSeries #LearnFromaPro #SuccessShot #ShaveaFewShots #FirstEver link in bio👌 @successseriesvr

For his education, Rickie went to join Murrieta Valley High School. During his senior year at the school, he won the SW League Final and then in 2007 also helped his team in the state final. Fowler then went on to study at the Oklahoma State University for his higher education and it was there where he won the Fighting Illini Invitational.

In June 2007, Rickie won the Sunnehanna Amateur and then it was followed by the Players Amateur. He defended these titles in 2008 and again helped the US team defend its Walker Cup.

This amazing young talent made his professional debut in 2009. He played in the Albertsons Boise Open on the Nationwide Tour. Next, he made an appearance for a charity match, ‘Justin Timberlake Shriners Hospital for Children Open’. It was his first professional PGA Tour event, where he was tied to the 7th position.

I made my #USOPEN debut 10 years ago as an amateur…this week we honor the ams who grind through qualifiers to make it here on the big stage…and we’re taking it a bit easy on @skovy14!! I’m excited to use a sweet carry bag and you can get it too! Follow @cobragolf to learn how!

In October 2010, Fowler became the youngest US player to play in the Ryders Cup. He was also the second youngest overall after the golfing legend, Sergio Garcia. He did make a mistake during the first match-day but nevertheless made an impressive comeback. His performance on the final day was simply exquisite. Fowler grabbed the ‘Rookie of the Year’ award for his work on the final day.

In October 2011, Rickie registered his first professional win at the Kolon Korea Open during the OneAsia tour. He also won his first PGA tour win in May 2012 in Charlotte. It turned out to be a remarkable win for this young chap which got him to the 24th place in the world ranking.

See you soon Scotland…I’m happy to be announcing that I’ll be playing in the Aberdeen Standard Investments Scottish Open this year!! Looking forward to some great links golf and can’t wait to get back to Gullane!! See you all in a few weeks!! #ASIScottishOpen #RolexSeries

In 2016, he marginally defeated Belgium’s Thomas Pieters at the Abu Dhabi HSBC Golf Championship. He was a runner-up at the event and ranked in the 37th place at the Rio 2016.

More recently, in November 2017, he finished runner-up at the OHL Classic at Mayakoba. He won the Hero World Challenge in December and finished T11 in 2018 with three birdies for the Waste Management Pheonix Open.

Currently, Rickie lives in Florida having relocated from Vegas. As many keen fans have wondered, his middle name Yutaka comes from his maternal grandfather who was a Japanese.

Happy 4th from @allisonstokke and me to you!! Hanging with our crew and @casamigos🍻

Fowler is not a married man, however, he is in a relationship with Alexandra Browne. They met through the famous golfer and Alexandra’s father, Olin Browne. The two started dating in 2010 but soon split up over some disagreements. In 2014, he started dating Alexis Randock. Randock is a swimsuit model and their relationship was full of controversies. Alexis was abused on social media by Rickie’s fans but he supported her nonetheless. However, the couple’s relationship came to an abrupt end in 2015.

Today is National Best Friend Day so I wanted to lock mine down…I WON!!

Currently, Fowler is dating his new girlfriend, Allison Stokke. Stokke is a pole vaulter and a sportswear model and the two have been together since may 2017. They first met and had a date at the MotoGP Grand Prix of the Americas. The couple is still dating and got engaged in June 2018. We are now hoping to see further developments in their love life.

Fowler has been listed as the no. 7 highest-golfer on the PGA tour by Forbes. He made a total earning of $17.3 million. In 2015, he got endorsed by many brands, which earned him a total of $10 million.

Excited to have the X in the fleet @wheelsup8760!! Really enjoyed being back in Fort Worth at Colonial @fortworthinv!! One of my favorite stops on tour!! Off to another great @memorialgolf✌️

So far, Rickie has never landed himself a major tournament win but his sponsorships and endorsements have played a huge role in his success. As of 2018, he has a net worth of almost $20 million and he is only 29-year-old.

Fowler is living in a multi-million dollar home in Florida. He has been living in the $14 million home since 2016. This young genius also owns several cars including Mercedes, Porsche, Nissan, etc. Rickie is also active on social media platforms and has massive fan followings. He has over 1.5 million followers on Instagram.