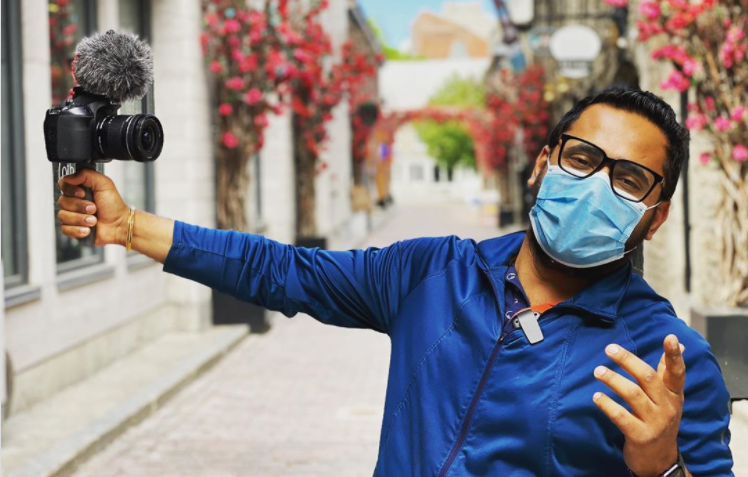 There are many YouTubers and bloggers today who can give advice on solo traveling or travel on an average budget. Such content creators bring you videos on their experience on solo traveling on average budgets with convenient trip tips and bookings for your ease of travel. So on the list, one of the YouTube channels called ‘Travelling Desi’ managed by Mohit Manocha. He is an Indian traveler vlog maker who is popular for his best budget traveling advice and sharing his experiences.

Furthermore, the social media influencer uploads the traveling blogs where he shared his experience on an average international budget trip and the information smart eating and traveling practice to bookings. Additionally, he had traveled to more than 25 countries including the USA, UK, and Europe. Let us scroll over to know more information him.

The Travelling Desi famed vlogger was born on 16 August 1986 in Faridabad, Haryana, India as Mohit Manocha. Now he is living with his mother in Canada, unfortunately, his father died in the year 2016 due to cancer. He belongs to Sikhism descent and currently has a nationality of India as well as Canada. Regarding his education, he has completed high school but didn’t join college.

On 17 January 2018, he launched his YouTube channel under the name ‘Travelling Desi’ and uploaded the first video on 15 June 2018, after five months. He uploads the videos on traveling to different countries on a budget that he makes from his IT software company. At the age of 17, he joined the IT company of his Uncle where he gained 25 percent of the partnership at the age of 19.

However, at the age of 26, he had some issues in his personal life which only left him a rental income. But now he has realized and began to save his money which he uses as of now, to make his traveling vlogs. In addition, he has gained 1.16 million subscribers as of November 2020 and more than 145 million views. His videos are mostly in Hindi languages where he shares the experience he had so far.

Talking about his personal life, he has maintained his personal life, especially his love life. However, he is a married man but revealed that he is engaged with some legal issues. Other than this, he has not shared information on his wife or dating history. Anyway, he loves to travel and also making videos on his daily lifestyle and featured his brother and mother in his videos.

From his vlogging career, he has made a huge amount of fortune living a lavishing life. For the content of his creative videos, he travels to different countries and shares his experiences. According to sources, the YouTuber makes an average income of $12,500 for a sponsored post with at least 100 thousand subscribers. The amount may vary according to their views and subscribers. Therefore, calculating his views and sponsors, he might earn a hefty amount. Further, his net worth has an estimation of around $1 million.

Traveling is as much about meeting new people and making new friends as much as it is about experiencing new places and cultures. While shooting the Austria series.. when I met Fatima, a flat mate and a Bosnian citizen, studying in Vienna. Recording an interview outside the very beautiful, St Charles Church in #vienna #austria #wanderlust #travelgoals ##worldtraveler #indianvlogger #indianyoutuber #thetravelingdesi #globetrotter #alwaystraveling #vacation

The traveler has a healthy and robust body physique that stands to a height of 5 feet 8 inches and weighs around 65 kg. His body measures 40 inches chest, 32 inches waist, and 12 inches biceps. He has black eyes color as well as black hair color.