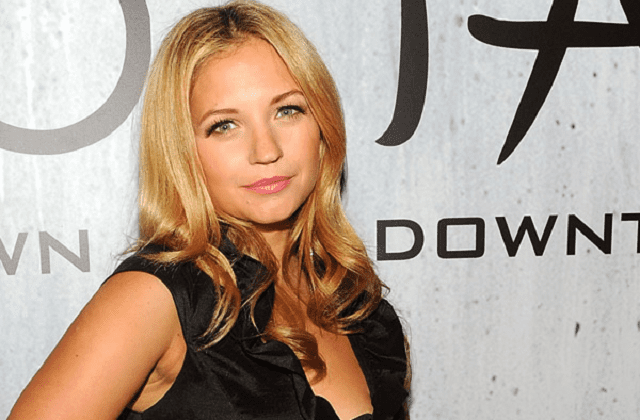 Balancing a personal married life and professional career is not something anyone can easily do. Vanessa Ray, a happily married American actress has proved to the world that it is possible to balance the two sides.

With her charming personality and extraordinary acting skills, she has gathered a huge number of fans and a heavy net worth as of 2019. To know in detail about her married life, children as well as about her career and earnings, read the whole article.

Vanessa Ray was born as Vanessa Ray Liptak on 24th June 1981 in Livermore, California. This makes her 38 years of age as of 2019. Ray was born to American parents’ James Liptak and Valerie Liptak. She comes from a mixed ethnic background of English, Slovak, and Hungarian.

Happy 40th wedding anniversary to my incredible parents. They were 18 and 23 here. Their navigation through children, loss of parents, location moves, jobs lost and gained, passions,disillusions, hopes, laughs, grandchildren, and art created have been an inspiration to every person to have met them. You continue to make my life worth LIVING fully. Thank you. #flowercrown #weddinganniversary #love

Ray was interested in acting from a very young age and pursued acting at her early 20s. It didn’t take her long to breakthrough and get renowned in the entertainment industry.

Is Vanessa Ray Married? Know about her Husband, Wedding, and Children

Vanessa Ray is happily married to a musician Landon Beard as of 2019. Their love story dates back in the year 2009. After dating for about six years, the couple got engaged on March 2015. Three months later, they formally became husband and wife.

Vanessa and her husband, Landon got married at Condor’s Nest Ranch which is located in Pala, California. She wore a beautiful two-piece dress with spaghetti strap top and a full skirt. Landon, on the other hand, wore a plain blue suit and pant with a printed tie and flower printed shirt which matched with the actual flowers Vanessa was holding.

If you are a big fan of Blue Bloods, you must know that Eddie Janko (who is played by Vanessa) just got married. The character wore another beautiful gown for the series and guess who picked it up for Eddie, it was Landon.

Vanessa revealed in a recent interview about the series that her real-life husband actually helped her choose the gown for the episode. This shows that even after years of togetherness, the couple is still like newlywed ones. Ray and Beard do not share any children yet, they might be planning to have one in the future.

It might occur as a surprise to you but Landon is Vanessa’s second husband. She was previously married to a prominent actor, Derek James Baynham in 23rd March 2003. The ceremony was also shown in the reality tv show, Marriage Under Construction.

But it looks like those who get married there, do not last long. After six years of marital relationship, the ex-couple decided to part their ways and officially got divorced in 2009. Vanessa doesn’t have a child from her first marriage as well.

What is Vanessa Ray’s Net Worth? Her Career Insights