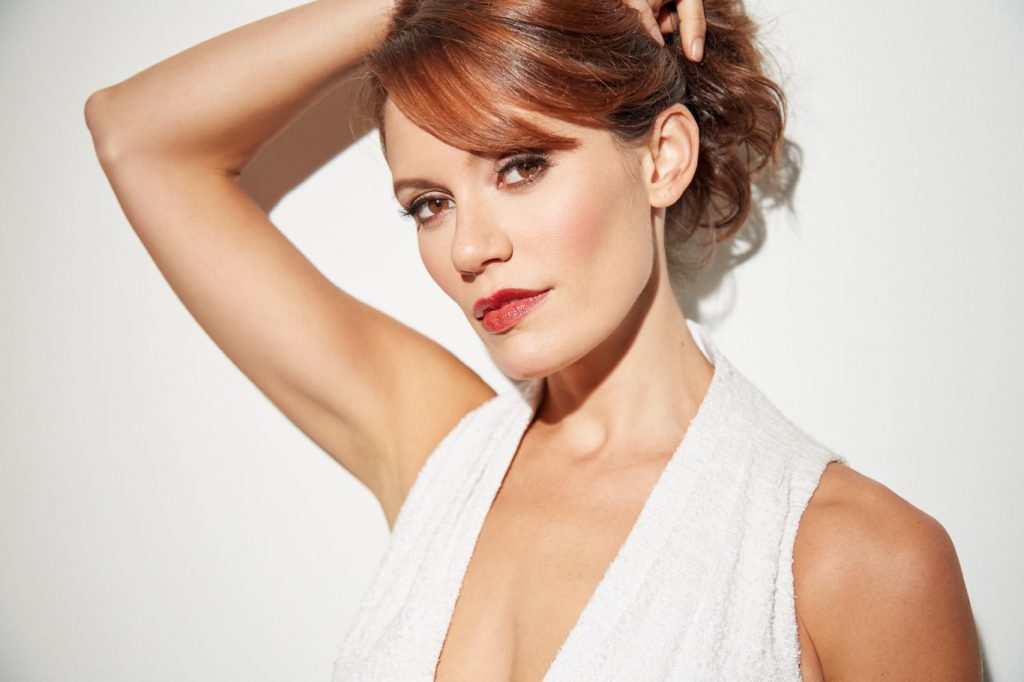 Emily Swallow is one of our favourite actresses who came into fame as Kim Fischer in “The Mentalist”. She has also appeared as Amara alongside the famous Amy Gumenick in the 11th season of “Supernatural.” These two roles are definitely some of her biggest roles but Swallow is not the one to be satisfied with a few successful roles and has appeared in many other roles.

Emily has also made several appearances for shows like “How to Get Away with Murder”, “Southland”, “Ringer”, etc. She is an extremely talented actress who is still very young and has a lot to offer to Hollywood. Let us now get to know a bit more about her.

I am overwhelmed by the kindness our #spnfamily has shown in supporting this fundraising effort for #JacmelChildrensCenter. (Click the link in my bio). It was a joy to jump into a photo session with the kind, funny, stealthy, patient @travishodges_us. I am often way too good at describing in words and not as good at trusting a feeling to come through in my body. But he helped me connect to the light I wanted to find, the off-kilter mischief I was feeling…and we had so much fun shooting! He is a pretty talented fellah, yes no? #ificouldtellyou. #Repost @travishodges_us (@get_repost) ・・・ If I could Tell you… about @bigeswallz, it would be that she's really cool, naturally, really cool. You find yourself talking to her about whatever then you stop and think, "'Man, she's really cool!" When Emily and I were discussing what we where hoping to capture, she mentioned that on #supernatural she didn't get to smile. Which is counter to her personality. Emily is fun and fearless. She took risks during the shoot. That takes a lot of courage. Because the whole time it's easy to sit and wonder if what you are doing is going to turn out or flop. From my perspective, it succeeded. Though her quote is quite deep, she found a way to express the beauty and joy in lessons learned. At the end of it all I felt very lucky to have worked with Emily. Here is an #outtake from our shoot together. Go checkout @shopstands #ificouldtellyou #calendar for the #jacmelchildrenscenter to buy one click on the link in their bio. #photography #worklife #lessonslearned #art #charity

Emily Swallow was born on the 18th of December, 1979 in Washington DC. She was born to parents Gary and Jo Swallow. Despite being born in the capital, she was raised in Jacksonville, Florida and Sterling, Virginia for the most part. Evidently, having been born in the States, Emily is of American nationality and belongs to white ethnicity.

May 19 was my Grandma Wilodean’s birthday. She would have been 98 this year. I feel like she looked the same (fabulous and put together- hair always beautifully styled, jewelry always in place) my whole life. Fortunately, I outgrew some of my own fashion choices 😳 #stonewash #shellacthosebangs #spiralperm #tightrolledjeans #fashionoblivious #thankgoodnessIlearnedhowtodressatleastalittlebetter

Swallow found her love for acting from a very young age when she was attending Stanton College Preparatory School. She was acting in various local, amateur and professional level theatre productions. She next went on to enrol at the University of Virginia. There she studied Middle Eastern Studies and graduated in 2001. After graduating from the University, Emily went to get a Master of Fine Arts (MFA) in acting from the New York University’s Tisch School of Arts.

Emily first began her career on Broadway on productions like “The Taming f the Shrew”, “High Fidelity”, etc. She also made several participations in off-Broadway productions like the “Romantic Poetry.” Later in 2013, Swallow landed a role in Mark Rylance’s Nice Fish. She was also involved in the production of the play by Ayad Akhtar, “Disgraced”.

After working on and off Broadway for several years, Emily was able to land her first TV role in the form of “Guiding Light.” It was a soap opera and was on air for a very long time. After her relative success with the show, she was then cast in shows like “NCIS”, “Flight of the Conchords” and “Southland.” However, her big break came when she made several appearances in the series “The Mentalist” as Kim Fischer.

Just found out we’ll be premiering at the @officialmarfafilmfestival in July! Love these girls and the dames who made the whole thing happen. @nueschsisters @brooke_fontana 🦄🦄🦄 #Repost @forgetmenottheshort with @get_repost ・・・ This week is #mentalhealthawarenessweek and in many ways it seems strange that there has to be a specific week designated to make people aware of something that is so prominent in so many of our lives. Coincidentally our film Forget Me Not that deals with a single mother suffering from bipolar disease has drawn its first attention this week by being selected by the @officialmarfafilmfestival. We are thankful to get a chance to shine a light – even if it’s small – onto one of many mental health stories. #mentalhealthawareness #shortfilm #mentalhealth #bipolar #filmmaking #womeninfilm #femaledirector #femalefilmmakerfriday

Next, after a successful run with the show, she was able to get a guest role in “How to Get Away with Murder.” Clearly impressed with her acting skills, she was then cast for the 11th season of “Supernatural.” Swallow has also worked on many films like “The Lucky Ones” and “The Odds.”

Emily is a beautiful woman who is extremely charismatic and people seem to love her. People are also very inquisitive when it comes to her love life. However, Emily is a married lady who is together with her husband Chad Kimball. The two walked down the aisle on the 28th of August, 2018, in Costa Rica at the Casa Chameleon Hotels.

A week ago today, I got to marry this guy. Today, I got to eat MORE cake with him, cause it’s his birthday! We hung out with some horses and monkeys and lizards. Like ya do in Costa Rica. I love you, @chadkimball76. #puravida #happybirthday #lascatalinas @casachameleonhotels

Clearly, she has done an admirable job in keeping her personal life away from the public attention. Moving away from her love life, Swallow is an amazing lady who is supporting numerous charities. She is also doing volunteer work for “The Surfrider Foundation” which is a non-profit organization that works for the protection of oceans and beaches.

Very little is available regarding the earnings of Swallow. However, it is safe to assume that she manages to earn a good fortune from her career. Given that she has been doing these for a long time now. Emily is also an established actress and as per various sources, she has a net worth which is just over $1 million.

Swallow is also very active on social media platforms. She does a lot of promotion of her movies and shows. Moreover, she also posts pictures of her travels, friends and projects on Instagram. She is quite famous on Instagram and has over 53k fans following her.