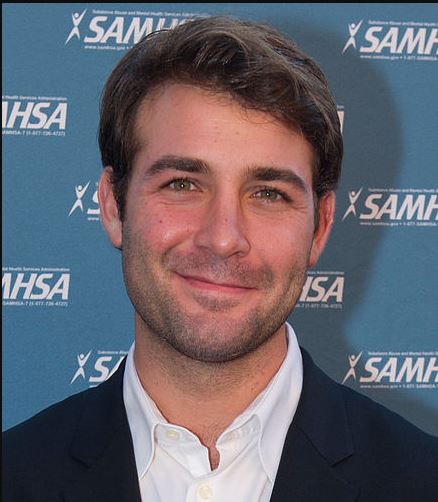 James Wolk is an American actor who is mostly known for his roles in popular comedy films and sitcoms like “For a Good Time”, “Call”, “The Crazy Ones” and” Zoo”. Wolk has also previously appeared in several other films and TV shows in the past. James has also worked for Hallmark Hall of Fame’s shows initially in his acting career.

Wolk is a Jewish and as a teenager, he worked at Bar and Bat Mitzvahs previously. The actor is now also one of the boards of directors of  Brad Cohen Tourette Foundation. Let’s get to know about the actor in detail.

Kicking off this holiday weekend right where I want to be: manning the grill! Happy holiday weekend. Hope everyone is hanging out with people they love and eating some food they love! #fourthofjulyweekend🇺🇸

James Wolk was born on March 22, 1985, in Farmington Hills, Michigan which makes his nationality an American. The actor was born to his Jewish parents, Edie, an art teacher, and Robert Wolk, a shoe store owner. Similarly, he was born in  Reform Judaism. He went to  North Farmington High School from where he graduated in the year 2003. Later, Wolk also went to the University of Michigan School of Music and Theatre.

Happy Father's Day, pop! Thank you for allowing me to learn from the best. #fathersday #family #siblings #lookatthatphone

His acting career began when he was cast as Brad Cohen in the Hallmark Hall of Fame’s “Front of the Class” that aired in 2008. Later he was cast in  Fox television series “Lone Star” as the lead. He also did other movies like the romantic comedy movie “You Again”. Later James joined the second-season cast of the dramedy “Shameless” followed by his recurring roles in the episodes of ABC comedy “Happy Endings”. Meanwhile, he continued to appear in TV shows like “Mad Men”, “The Crazy Ones”,” Zoo”,” This Is Happening” and much more.

@zoocbs coming to your screens in five hours, east coast. Get ready for a wild ride. #zooseason3

Now getting to the actor’s personal life, let’s make it clear that he is married. James Wolk married his wife Elizabeth Jae Lynch in June 2015. The couple tied the knot at a ceremony held at Crossroads Estate, Firestone Winery in Los Olivos, California. James proposed his wife in a very casual way though he had some bigger plans on his mind. James made the proposal while going out for a walk with their dog to which his wife said yes and this led to their marriage.  The happy couple also welcomed their first child, a son named Charlie at the beginning of 2017.

The Mad Men actor has played several roles as of now. He is a part of a bigger fame after portraying some spectacular roles that are among the audience’s favorites. Though we are unaware of the actor’s income which he receives from his movies, his net worth estimation is $2 million.

Just in case you were wondering, James Wolk is also active on social media sites like Instagram and Twitter where he posts frequently. At present, he has around 38.1k followers on his Instagram page.

You might also want to take a look who Frances Conroy is.