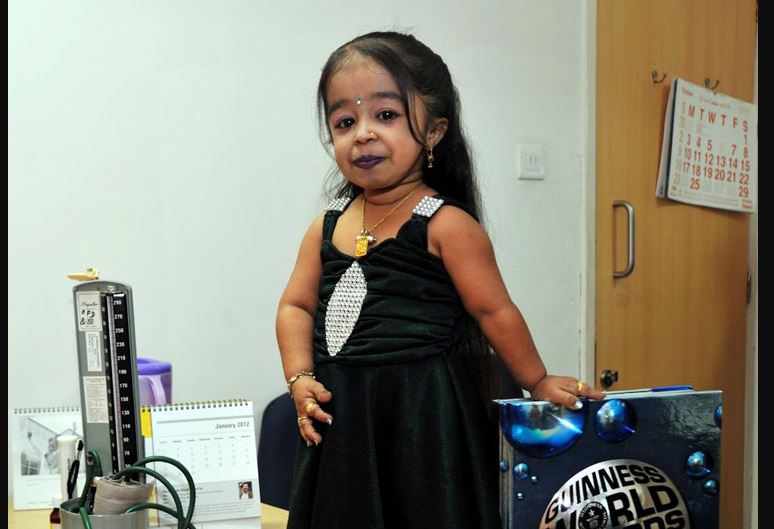 Jyoti Amge might sound like a very familiar name if you are updated with the Guinness World Records. She is the living shortest woman of the world. The 24-year-old is famous across the world for holding a record for her short height.

Jyoti Amge is from Nagpur, India and is an interesting subject to many who wish to see and learn about this bubbly and lively Guinness record-holding personality with the height of only 62.8-cm-tall 24.7 inches.

Jyoti Amge was born on 16th December 1993 in Nagpur, Maharashtra in India which makes her nationality an Indian. Her parents are Kishanji Amge and Ranjana Amge. Amge grew up along with three of her sisters named Archana Amge, Rupali Amge, and Vaishali Amge and also a brother Satish Amge.

Jyoti Amge was later diagnosed with achondroplasia, which is a growth abnormality that causes the height restriction in people. She has a height of 62.8 centimeters that is just 2 ft. 6 inches. Amge was in the 2009 documentary with title Body Shock: Two Foot Tall Teen. Jyoti Amge officially became the shortest woman alive on her 18th birthday by Guinness World Records. In addition, Amge also appeared on the Indian television show Bigg Boss 6 which is a popular Indian Television series. Later Jyoti was lucky enough to get a role in the popular thriller series American Horror Story: Freak Show.  In the show, she appeared in 12 episodes as Ma Petite.

Not as much as we missed you, Ma Petite. #AmericanHorrorStory pic.twitter.com/vH0ZidBeyz

Jyoti Amge husband is the topic of curiosity to many of the people around the world who know her. Amge is however not married yet and doesn’t have a husband or a boyfriend. There were a few controversies in the past few months as a photo of the two became viral around the internet. The user used the photo with a caption stating that Jyoti was soon marrying the man in the photo. However, the Amge family denied all the rumors and filed a case against the user who used the photo to make the fake news viral.

Jyoti Amge turned to an overnight celebrity after she became Guinness world record holder gathering attention from all over India and other countries as well. Amge’s life totally changed after which she met famous celebrities in India and even some international celebrities. Though much of her life is pretty transparent her net worth estimation is not public yet. Besides Guinness World Record, she is also an actor. Therefore, we can assume her net worth be more than 500,000 dollars.

World’s shortest woman is also active on social media platforms. She is active on Twitter where she is most active and shares posts quite often. She doesn’t have an Instagram account as there are no accounts as such which looks authentic.