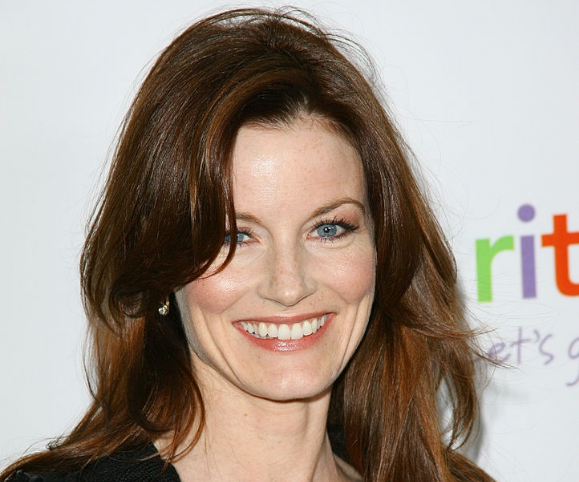 Laura Leighton is an American actress. Many people know her for the role in America primetime series “Melrose Place” from 1993-1997. She portrayed the character of ‘Sydney Andrews’ and also for its remake from 2009-2010. Also, she has been noticed for work in the series “Pretty Litte Liars” as Ashley Marin.

Besides these, she has gained critics acknowledge and accolades for her performance. Moreover, she has also hosted an episode of “Saturday Night Live” in 1995. Since early 1990, she has appeared in several movies and television dramas. Let us scroll down to know more about the beautiful actress.

The actress was born on 24 July 1968, in Iowa City, the United States of America. There is no information on her parents and siblings. However, in 1988, Laura adopted her maternal grandfather’s surname “Leighton”.

Talking about actress’ education, she has graduated from West High School in 1986 from Iowa City. During her school days, she has participated in the cheerleaders. Also, Leighton was a talented vocalist and instrumentalist. And had joined the school’s choral group “Good Time Company”. After graduating from school, she went on to join the dancing troupe “The Young Americans”. Then the group performed in the 1987 intercountry tour.

Happy Birthday to my big sis! You've always been my idol! ❤️#tbt pic.twitter.com/PQQhs85QRg

Leighton joined California State University for further education in Long Beach, California. There she graduated from the business faculty. Afterward, she moved to Los Angeles where she took initiative for her acting career.

Leighton started her journey in acting from the early 1990s with commercials. Then she got her big break through the series “Melrose Place” as ‘Sydney Andrews’. After the fifth season of the show, she has chosen to leave the show in 1997. Again in 2009, she appeared in the remake of the show with the same character.

She has appeared in television films like “Love Notes(2207)”, “Daniel’s Daughter(2008)”, “Mending Fences(2009)”, and “Christmas on Honeysuckle Lane(2018)”. Laura has featured as the guest role in the shows like “Cupid” and “The Outer Limits”. She made her movie debut with the “Angels, Baby!” as Jessica in 1999. Afterward, she was featured in the movies like “Clean and Narrow”, “The Sky is Falling”, and “The Burrowers”, among others.

Leighton has appeared as the main role in the series like “Eyes” as Leslie Town and “Pretty Little Liars” as Ashley Martin. In 2018, she appeared in the role ‘Sonya’ in the medical drama “Code Black” in the episode ‘Change of Heart’. In 1995, she was nominated for ‘Best Performance by an Actress in Supporting Role in a Series’ by Golden Globe Awards for ‘Melrose Place’.

Coming over to her marital status, she is a happily married woman. Laura has married her co-stars Dough Savant from the series ‘Melrose Place’. Together the couple had worked for a long time. But they began dating in 1997 and in the same year, the couple got engaged. After the six months of their engagement, the couple tied a knot in May 1998. They got married in a private ceremony where only their close friends and family were present.

Together the couple has greeted two children. They are son Jack Douglas in 2000 followed by second daughter Lucy Jane in 2005. Also, Dough has two children from his previous relationship. They are two daughters Arianna Josephine Savant in 1992 and Madeleine Marie Savant in 1993.

Leighton has been working in the entertainment industry since 1993. She had worked in many films and drama especially on television. She has grabbed all the roles which polished her performance. Further, she has earned a pretty good amount from her career and will be increasing more. Therefore, she has a net worth of $3 million. And according to the sources, she collected the salary of $352k per annum.

Happy Birthday, dear @ashleybenson I adore you, Beauty! 💕 I’m pretty sure you were 19 when you first became my #PLL daughter… Sheesh. Have a fantastic b-day, Ash. Try not to be too much of a grown up. 😘🎉🎂

The beautiful actress has a slim and curvaceous body build. She stands to the height of 5 feet 4 inch or 1.63 meters and weighs to 55 kg. Further, her body measures to 34-24-34 inches. She has a beautiful pair of blue eyes and red hair.