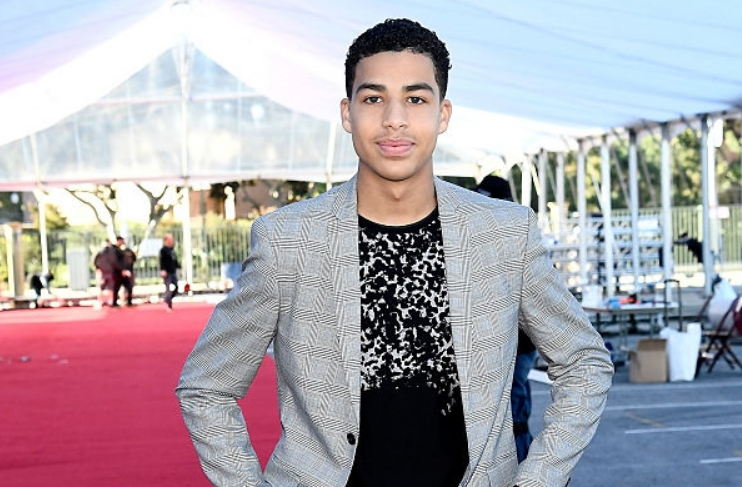 Marcus Scribner is a 19-year-old American actor. He is recognized widely for the role of Andre Johnson Jr. in the ABC’s sitcom ‘Black-ish’. In the series, he has portrayed the son of the lead characters. He has garnered a huge fan following through his outstanding role from the series.

Furthermore, he has also voiced for the character ‘Bow’ in the animated series ‘She-Ra and the Princesses of Power’.  The Netflix animated series has been critically acclaimed series. Let us scroll down to know more about the talented teenage actor.

Mood on this gloomy Saturday #suncomeback

Scribner was born on 7 January 2000 in Los Angeles, California, the United States. He was born to the father Troy Scribner and there is no more information on his mother. He grew up in Los Angeles along with his younger sister Athena. The actor belongs to the mixed ethnicity of black and half white. Additionally, his maternal grandmother is from England.

Looking at his education, Marcus attended a primarily Jewish elementary school. From an early age of seven, he has been exposed to have an interest in acting. However, from at that time, he chose the acting classes over the sports. But it does not mean that he is not into sports. Despite that, he loves to play sports like basketball and lacrosse. In 2014, he attended the public high school and due to his work schedule, later in 2015, he enrolled himself a homeschooled.

2009-2019. Not much has changed. Still sweaty all the time. Still rockin the swoosh. And still posing for awkward photos. (P.S. yes that’s an ostrich in the background 🦃 there’s no ostrich emoji, but take this turkey one in its place) #10yearchallenge

Marcus has started his career from the tender age of 10. He first appeared as the guest-star role on the ABC crime drama ‘Castle’. Then, he appeared in the shows and series including Nickelodeon’s ‘Wendell & Vinnie’ and Fox’s ‘New Girl’. His career took turned when he was cast in the ABC sitcom series ‘Black-ish’ at the age of 14. He has been cast opposite Anthony Anderson, Tracee Ellis Ross, Laurence Fishburne, and Jenifer Lewis.

Furthermore, he has received an NAACP Image Award nomination for the ‘outstanding supporting actor in a comedy’ in 2016. He made his film debut with the movie ‘The Good Dinosaur” in 2015. In the movie, he has voiced for the character ‘Buck’. Further, he has voiced for animated sitcom ‘American Dad’ as Movie Goer and smudge in ‘Home: Adventures with Tip & Oh’.  Marcus has appeared as Darius in Youtube Red original film ‘Alexander IRL’.

Rain or shine, Dr. Scribner is always on call 🤪

After gaining fame, many people must have been wondering about his relationship or personal affairs. However, there is not much about his personal and love life. The actor currently seems to be single and not thinking to hook up in a hurry. At present, he is focusing on his acting career and does not wish to involve in may kind of matter.

There is no news on his involvement regarding controversies or rumors. It seems that the teenager has been focusing on his career and prefer to stay out of the news up to now.

Why is my stance so wide tho 🤠

The Black-ish actor has started his acting career at a very young age. However, he came in the limelight after joining the cast of sitcom ‘Black-ish’. Therefore, he has garnered an impressive net worth at the age of nineteen. He has a net worth of around $1 million collected form his acting career.

So where we off to this gloomy Wednesday 🌨

The actor has a height of 6 feet 1 inches or 1.85 meters. His body weight weighs to 70 kg or 154 pounds. He has short black hair and dark brown eyes color. There is no further information available on his body statics.