Mike Hill is a popular television personality and a talk show host. Currently, he is working with the Fox Soul where he hosts the show ‘Mike and Donny Show’ since October 2019. Next, he is with the network Fox Sports1 since August 2013 and has contributed to several programs. Further, he has hosted the early evening program ‘America’s Pregame’ along with co-host Molly McGrath from April 2014 until its cancellation in September 2015.

Moreover, he had worked with ESPN from 2004 to 2013. With the network, he has hosted ‘Hill and Schlereth’ show along with co-host Mark Schlereth. Additionally, the television personality has married his girlfriend turned wife Cynthia Bailey of Real Housewives of Atlanta. Let us scroll over to know more information on his personal and professional life.

He was born as James Michael Hill on 19 August 1970 which makes his age around 50 as of 2020. He was born in New York City, the USA, and spent his childhood in the Bronx as well as Bessemer, Alabama. Further, he has a brother named J.R. Hill and has a mixed ethnicity of the Afro-American. He finished his schooling at a local school and later joined the US Air Force as a reservist.

After that, in early 1995, he began his career as a sports director at WHAG-TV in Hagerstown, Maryland. And he got his first anchoring work with KSEE-TV in Frensco, California. He then covered high school football for WKRN-TV in Nashville from 1997 to 2000. During that period, he also received two Emmy Awards. For the next two years, he spent his time at New York City-based Fox Sports Net as its host.

Before joining ESPN in 2004, he spent two years from 2002-04 at KXAS-TV in Dallas as a sports anchor. Then from 2004-2013, he worked at ESPN hosting variety shows including Sportscentre, NFL Live, and Highlight Express, among many others. Then in 2013, he joined Fox Sports 1 (FS1) as a guest host for Fox Sports Live and Fox Football Daily. In 2018, he began hosting BIG3 games for their second season as well as ‘The Kike and Donny Show’ from October 2019 on Fox Soul.

#FBF I’ve got to show love to my big brother, Preston. Been propping me up since I was a shorty & continues to do so today. Thanks for being my best man and making me feel calm and comfortable on one of the biggest days of my life. Love you bro!!

Coming over to his personal life, he has married twice and divorced once. He has first married to Camile Hill. She is a model and a former Miss Universe participant. The couple married on 24 July 2010 at the Fernbank Museum of Natural History. The couple shares two daughters: Ashlee and Kayla from their marriage. However, their relationship began to sink and took a divorce in March 2017.

He currently is married to a beautiful actress and model, Cynthia Bailey. Bailey is best known for her appearance in the reality show ‘The Real Housewives of Atlanta’. However, she debuted her acting career with the 1985 film ‘The Dark Power’. The couple first met in 2018 and started to date. Then they got engaged in July 2019 and tied a knot on 10 October 2020 in a lavishing wedding. Their wedding held at Towne Club in Acworth, Georgia. 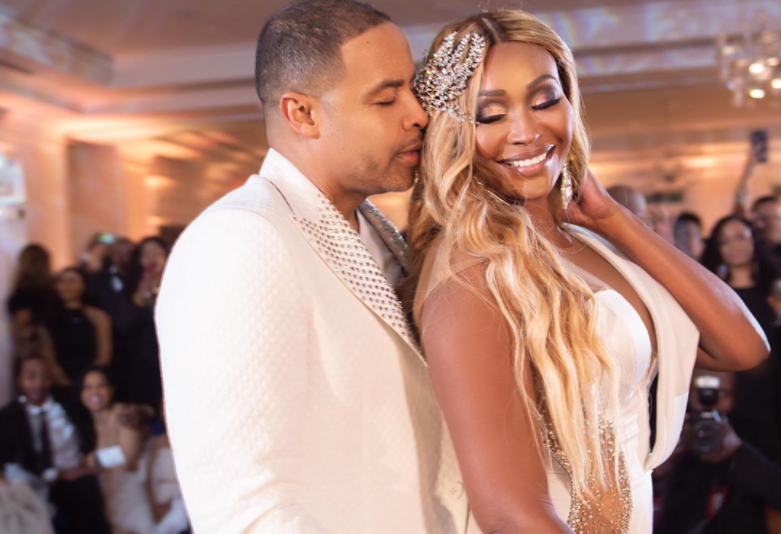 He has been gathering experience working as a sportscaster over the decades. Therefore, he is making a hefty amount of money from his profession in sports journalism as well as the entertainment industry. According to sources, he has a salary of $1 million annual and a net worth estimated at around $12 million as of now.

It’s always been my dream to host a talk show, outside of sports & now I am. I recently started an incredible venture for a new streaming channel called @foxsoultv It’s a channel that spotlights the things impacting black culture & I couldn’t be more proud to be a part of it. I’m hosting 2 live hours, along with @drano1goodfella & it’s uncut, raw, informative, provocative, entertaining, enlightening and something I pray you’ll watch and support. We’re on each weeknight from 6-10 with replays during the day. My show is from 6-7 & another show from 8-9p pacific time. Appreciate it!! Wanna check it out?? Link is in my bio or go to FoxSoul.TV Photo cred @cynthiabailey10 (if I hadn’t put this up here, she would’ve flagged me for copyright infringement….read her comment. 😂

The television personality appears to be a fit and healthy person with a great physique. His perfect body stands to a height of 6 Feet while weighing 82 kg. He has dark brown eyes as well as hair color and has a body measurement of 44-34-38 inches.