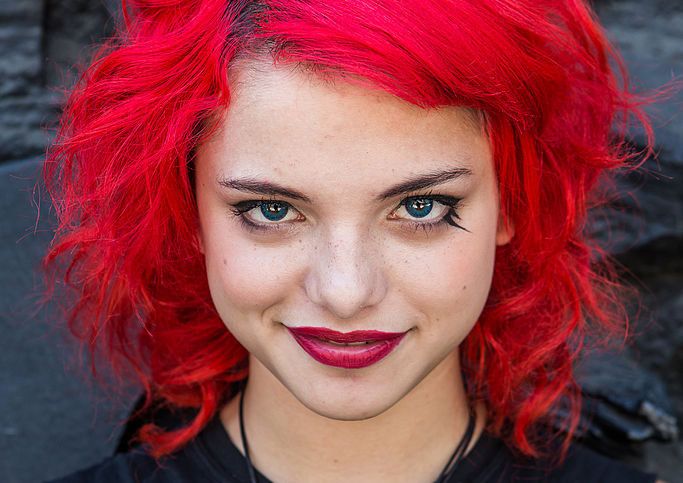 Nia Lovelis is an American drummer of the pop-rock band “Hey Violet” and also the backing vocalist. First, the band began with the title ‘Cherri Bomb’ in 2008 and later in 2015, their band changed the name. Therefore, they also changed their musical style from hard rock to pop rock, pop punk, and so on.

Moreover, Nia has also hosted the music network Revolt.tv. Also, she along with the band has toured many musical tours in Europe. And has gained the opportunity to work with her favorite bands like “Foo Fighters”. Let us scroll down to know her more in details.

Lovelis was born on 1 January 1997, in Pear River, New York. She grew up along with her sister Rena Lovelis in Orange Country. She was born to a musical family, her father is a touring Keyboard technician. Her mother Ana Lovelis is an actress and musician. From an early age, Nia and her sister Rena was involved in music and has participated in performing arts too.

Looking at her education, she has completed her basic education in the orange country. There is no information about her further education on the media. She belongs to the mixed ethnicity of German, Russian, Italian, and Polish.

and here's us being fashion icons during spirit week at school. a part of me wishes i had this outfit lol

Belonging from the musical family background, she has exposed to music at the age of seven. Since then, she has started to work on her music and drums. At a very age of seven, she started with practicing on a set of Roland V-Drums. That was set up in the garage by her parents. After that, she started to take a class and joined a band camp.

Around the age of eleven, Nia went to a rehearsal studio in the Valley and jammed with other talented musicians. Then in 2008, while they were still in middle school, they formed their band “Cherri Bomb”. She along with other members Julia Pierce (leader and vocalist), Miranda Miller (keyboards, rhythm guitar), and her sister Rena Lovelis (bass guitar). The popular band has released two studio albums, nine singles, and nine music videos. However, only the Lovelis sisters became permanent of the band and other two left the band.

In 2015, they changed their band name to “Hey Violet” and the same year the lead vocalist Julie left the band. After sometimes, Miranda also left the band due to hetrick tours of the band. At present, the band consists of four members. They are Rena (vocalist), Nia(drums, percussion), Casey Moreta(lead guitar), and Iain Shipp (bass guitar and synth bass).

Regarding to the personal life of Nia, she seems pretty much secretive. However, we are here to inform about her love life. Previously, she has been involved with various musicians. Brennan Benko is one of her boyfriends whom she has dated for a long time. Sadly, the couple has broken up a few years ago.

Currently, she is been rumored to have a relationship with Calum Hood. He is a bassist and vocalist, since 2015, they are dating. Also, they are often seen in the public together. Moreover, the drummer has not involved in the controversies and rumors. Also, she is currently focusing on her musical career.

The talented drummer has been involved in the musical career since her childhood days. Therefore, she has managed to gain a good income from her career. Also, she has garnered a profit from her tours and hosting the show as well. Further, she has a net worth over $2 million.

The beautiful drummer has a slim body build and has a height of 5 feet 4 inch or 1.63 meters. Her body weight weighs to 55 kg or 121 pounds. She often dyes her hair and at present, she has dyed to red color. Additionally, she has attractive blue eyes. But her body measurements of waist, hip, and chest are not available.

Unlike her sister Rena, Nia has got tattoos on her body. On her upper back, there is a butterfly, writing on her biceps, Visudha chakra on her forearm, and exclamation mark on her wrist.