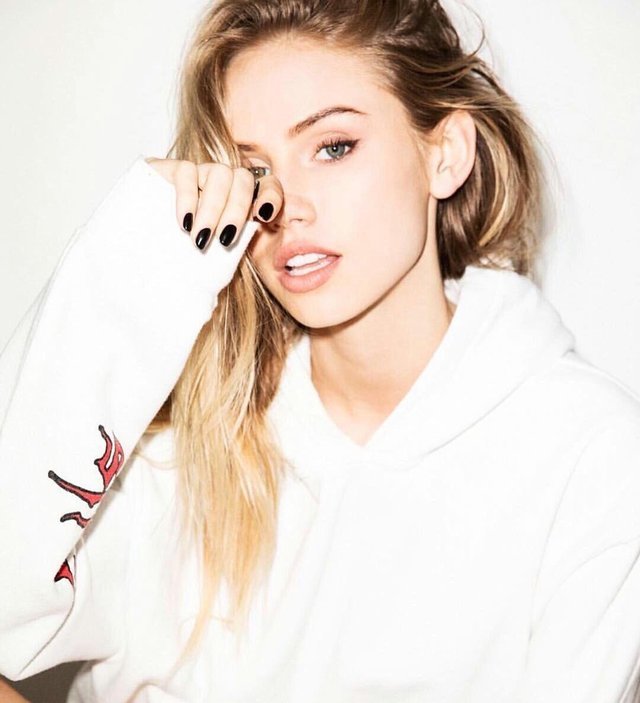 The American model, Scarlett Leithold is also an internet personality. She was discovered by a model agency in the age of Fourteen. Then, following year, she officially started her modeling career. Like Jocelyn Chew, she also started modeling at the very tender age of 15. Currently, she has become the face of the popular Italian fashion brand ‘Brandy Melville’.

However, she has worked for the Wilhelmina and Next Model Worldwide. Leithold has gained popularity after working with the Brand ‘Brandy Melville’. The model has also drawn the attention of the audience when Justin Bieber poster her pictures on his IG. Let us now get to know more about the beautiful and young model.

The beautiful was born on 1 June 1997, in Los Angeles, California, USA. There is not much information available about her father. Therefore, her mother Sharolyn works as a nutritionists. She has two siblings: elder sister Martine Leithold and younger brother Wolfgana Leithold.

Leithold belongs to the ethnicity of Swiss, German, Irish, Dutch, and English. At the age of five, she temporarily moved to Butler, Pennsylvania. And again after six years, she was relocated to Los Angeles. Reports say that the model was homeschooled after starting her career.

The young model was introduced in the glamorous world at the age of 15. She has the desire to step into the world of modeling. So, she was discovered by the modeling agency, Wilhelmina Models at the airport. However, at that time she was just fourteen but she signed the agency when she became 15 years old. Leithold spent some years with the agency and later moved to Next Model Worldwide.

From where Leithold’s career took a new turn and got stardom. Further, she got the opportunity to work with yet controversial but top Italian brand ‘Brandy Melville’. The company was controversial because it only manufactured the single size. And only fits the slender girls and maintain the tag policy ‘one size fits most’. However, it was famous among the young girls in the US. Moreover, the association with the model has increased the popularity and also in profits.

Now coming to the personal aspects of Leithold’s life, then she seems to be more secretive. the 20-years-old beautiful diva has not shared about her personal life. Scarlett could be single right now because there is no news on her hooking up with anyone.

At the moment, she is focusing on her career. She also prefers to build up career before stepping into the relationship or commitment dating. The uprising model once became popularity when the Justin Bieber posted her pictures on his Instagram. But she never followed him back as saying ” i am not big fan of Justin Bieber”.

Scarlett has been in the industry since the age of fifteen. Therefore, she has increased for fame in her four years of career. And planning to continue further years to earn her name. As per reports, she has a net worth more than 500,000 dollars as she is the ambassador of the top brand. Further, she also believes the advantages being on modeling line is to wear a lot of new trendy design wears, meeting cool people and traveling.

Scarlett further says that she only not fits for the dresses. But also for different makeups and hairdos can be given to her. Additionally, Leithold being a social media personality, she has been active on different media platforms. But also active on ASk.fm by the handle “sscarlettleithold” and on the regular basis she answers the question of her fan. Moreover, she has an official account on the Twitter by the handle “@SLeithold” with 33.7K followers. Leithold does not hold any account on Instagram but has a fan-created account. She does hold an account on Facebook which is unofficial.

Scarlett has tall and slender body stands to a height 5 feet 9 inches. While she weighs 59 kg or 119lbs. She has a blue eyes and with naturally blonde hair. Also has a big fuller lips with a thin face suited for all kind of makeups. Her waist is 24 and hip size is 34.