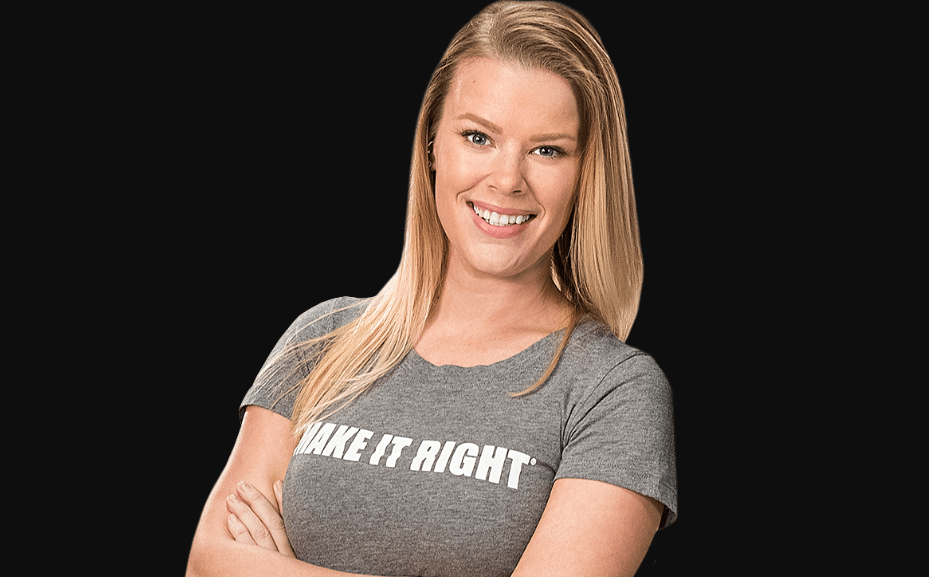 Sherry Holmes is a Canadian television personality, contractor, and DIYer. She began to get popularity after appearing in the DIY network ‘Make It Right’. There she appeared along with her popular contractor father Mike Holmes and brother Mike Jr. as well. Further, she grew up watching and working with her father. So at the early age of sixteen, she walked down the path of her dad and made her career as a contractor.

Apart from that, she has also been a big supporter of youth who wants to have a career in the trades. Moreover, Holmes mentored young women in Conestoga College’s Jill of All Trades and Build a Dream. She is an ambassador for Habitat for Humanity’s Annual Women Build Event. To know more details, let us scroll down to read on personal life, affair, net worth, and body measurements.

Holmes was born on 21 June 1987, in Ontario, Canada as the daughter of popular television host and Canadian businessman Mike Holmes Sr. and mother Alexandra Lorex. Her father is also a general contractor and also produces television shows based in homes construction where he appeared himself too. But there is no information on her mother. She has two siblings; brother Mike Holmes Jr. who also worked along with his father. And sister Amanda Holmes who has an interest in fitness and married.

Her parents got divorced in 1993 and currently, her father is in a relationship with Anna Zappia. Regarding her education, since from an early age, she started to work in this field, she has not shared information on her educational background.

Initially, she does not want to involve in the constructive work like her father and brother rather, she would prefer to travel and support youths. But she joined the construction after she helped the victims of Hurricane Katrina and build their homes back in 2008. Since then she remained to work as a contractor and helped to build the homes of low-income families.

However, at the age of sixteen, she has worked in her father breakout series ‘Holmes on Homes’, behind the scenes of the show. After that, she became a permanent member of the ‘Make It Right’ crew along with her dad and brother. Then she appeared on ‘Holmes Makes It Right’ and ‘Holmes: Next Generation’ on DIY Network. From mid-September 2019, she joined the cast of HGTV’s third season of Home To Win.

When it comes to sharing information on her personal life, she has kept her lips tightened. Sherry engaged to her longtime boyfriend Blake Steed on 11 June 2017. But there is no information regarding the beginning of her relationship with her fiance or dating history. Despite that, the couple married on 12 November 2018 while she was pregnant with their first child. On 22 April 2019, they welcomed their daughter Cali Kay Holmes Steed.

Furthermore, the television host rumored to have a relationship with TV personality and builder Damon Bennett. However, the rumored vanished when she engaged to her boyfriend Steed.

Coming over to her earnings and net worth, due to her hardship and dedication, she has successfully made an income in six-figure digits. Though she has not revealed her exact net worth, according to different sources, her net worth is estimated to have over a million dollars.

The beautiful and hardworking builder has an average height of around 5 feet 5 inches. But she has not revealed any information on her body weight or body stats. She has a beautiful pair of hazel eyes with medium blonde hair color.