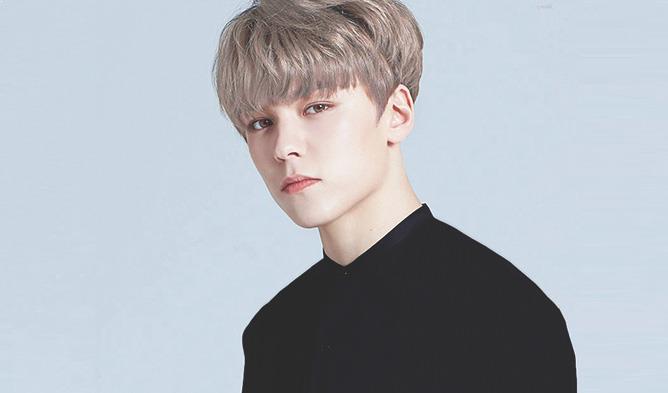 Vernon is a popular celebrity singer of South Korea. He is the member of thirteen K-pop boy group “Seventeen”. The group was formed by Pledis Entertainment in 2015. It is divided into three sub-units: “Hip-Hop unit”, “Vocal Unit”, and “Performance Unit”.

Vernon belongs the Hip-Hop Unit whereas Yoon Jeonghan is from the Vocal Unit. He also had participated in the Mnet’s “Show Me The Money 4”. He came into the spotlight after featuring into the reality show “Seventeen TV” as a lead rapper. Let us not waste time and dig up the interesting about the K-pop singer.

Vernon was born on 18 February 1998, in New York, the USA as a Hansol Vernon Chwe. His father, Simon Choi, an artist is a Korean. While his mother, Melody Chwe, is from the US and is art teacher. Vernon’s family moved to Hongdae, South Korea when he was just five years. He grew up in Korea along with his younger sister Sofia Chew. Additionally, he is very close to his younger sister, even he has tattooed her name in his arm.

Regarding his education, he has finished his elementary school from Ewha University Elementary School. Moreover, there is no information about further education. From an early age, he has build his interest in musical career. So, he choose his passion as his career. Then he signed the record label Pledis Entertainment.

Vernon was a trainee for 3 years and 3 months before his debut the band “SEVENTEEN”. Then he appeared in reality TV show “SEVENTEEN TV” along with other young talents. The grand finale of the show made the debut of the boy group on May 26, 2015. Then he was moved to Gangnam along with other group members.

The talented boy’s group released their first EP “17 Carat” on digital platforms. EP gained massive hits and was listed on the US Chart. Their debut year was lucky for them because they have gained popularity through their second EP “Boys Be” too. Their success showed them to record the awards like Seoul Music Awards, Golden Disk Awards and other.

The group’s first album “Love & Letter” was released on 2016 which was another hits. It directly hit the international music charts. After that, another EP “Going Seventeen” was released on same year which collected a huge success. In addition, Vernon has featured in a handful of music videos like “Man k’s Falling”, “Orange Caramel’s My Copycat”, and so on.

Coming to his Personal life, he is one of the celebrities who like to keep his personal life a private. There is not much information on his personal life or love life. Right now, the 20-years-old singer has not involved in a romantic relationship. Probably, he must be single and focusing on his career. Moreover, he was voted by his members for acting cute because he acts cute around the girl group members.

Also, he says his ideal girlfriend must be heartly connect with him. Further, he has not involved in any rumors and controversies. Therefore, Chew prefers to focus on his work rather than publicity. But recently in 2018, he had suffered from the leg injury but also he participated in the concerts for his fans.

As a popular member of boy group band “Seventeen”. He has gained a lot of popularity for his rapping style. Therefore, he has earned an impressive amount from his musical career. However, his net worth has not disclosed. But, it can be assumed to be around a million dollars.

Further, Vernon also adds profit to his net worth through the commercials and endorsements. Additionally, he has an interest in sports like archery. He loves to dress in casual style with spicy impact.