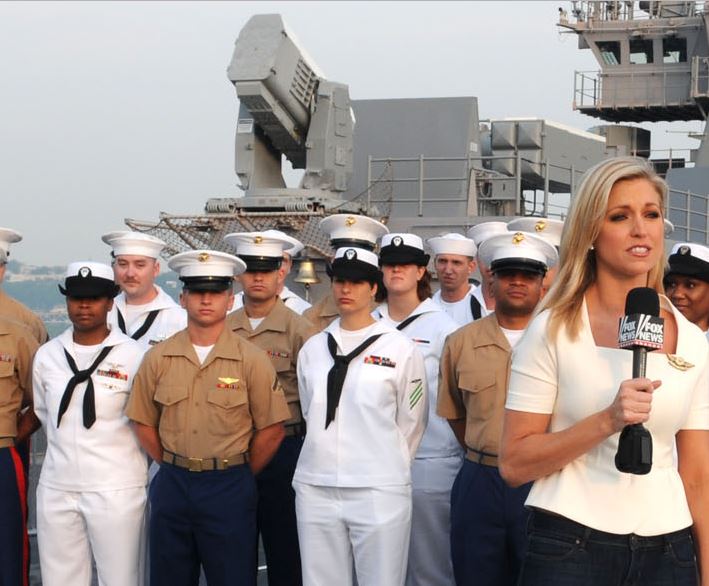 Ainsley Earhardt is an American TV personality and broadcast journalist who works for Fox News. She is most famous as the co-host of “Fox and Friends” while having her own segment at Hannity which is another show on the Fox news networks covering current affairs and political events.

Ainsley, age 41, lives in the New York City while also working for Fox Entertainment group. Let’s get to the details of her personal life, career, life before fame and relationships.

Thank you #LauraIngraham for having me on your show tonight! I’m so grateful. @foxandfriends @foxnews

Ainsley Earhardt was born September 20, 1976, in South Carolina which makes her nationality an American. She went to  Sharon Elementary School which was additionally attended by fellow Fox journalists Heather Childers and Anna Kooiman but during different times. She graduated from Spring Valley High School in the year 1995. Later after graduation, she went to Florida State University with a leadership and academic scholarship to pursue biology. However, she had a change of heart and decided to journalism in  University of South Carolina (USC) from where she earned a bachelor’s of arts degree in Journalism.

Sharing one of my favorite Bible verses along with a personal photo included in my memoir, #TheLightWithinMe (coming 4/24). Photo caption from the book: "Celebrating my first birthday cake in 1977. Our family still has that highchair."

Her career officially began after she was hired to work at the local CBS station in Columbia, South Carolina as a reporter for WLTX-News 19 before even graduating. Later in the year 2005, she moved to San Antonio Texas to host weekday newscasts of KENS-TV Eyewitness News which was broadcast twice a day; mornings and noons. Her career with the Fox news only began in the year 2007, when she joined Fox News Channel as an anchor.

Rise and shine! We hope you’re starting your week with @foxandfriends. Slide ➡️ for stories we are covering today. @foxnews

Talking about the personal life of the TV personality Ainsley Earhardt is quite interesting. She was once married to her college sweetheart Kevin McKinney, in April 2005. The marriage, however, did not go that well and it ended after four years in the year of 2009 with a divorce. After the divorce, Ainsley moved on with her life and married former Clemson University quarterback Will Proctor in the year 2012. Likewise, she announced her first pregnancy later in 2015 making it official on the show of Fox and Friends. Eventually, she gave birth to her first child, a baby daughter, Hayden on November 6, 2015.

Showing Hayden some of the pictures in my new book, “The Light Within Me,” available tomorrow! #TheLightWithinMe @foxandfriends

Ainsley Earhardt is so far a celebrity now with her long career in journalism and broadcast media. The TV personality has won many accolades throughout her career while also gaining fans for her amazing personality on TV world. The news reporter makes an impressive $400,000 annually that adds to her total net worth estimation of $5 million.

Earhardt is also quite active on social media platforms like Instagram and Twitter. Being a media person, she tries her best to connect to her audiences and fans through her social media accounts. At present, she has around 121k followers on her Instagram account. Furthermore, she has released her own memoir recently which she promoted on Sean Hannity’s show as well.

Join me TONIGHT, 7:30 pm @BookMarkShoppe in Brooklyn, NY for a signing of my new memoir (on sale today), THE LIGHT WITHIN ME. I hope to see you there! www.bookmarkshoppe.com/event/ainsley-earhardt-light-within-me