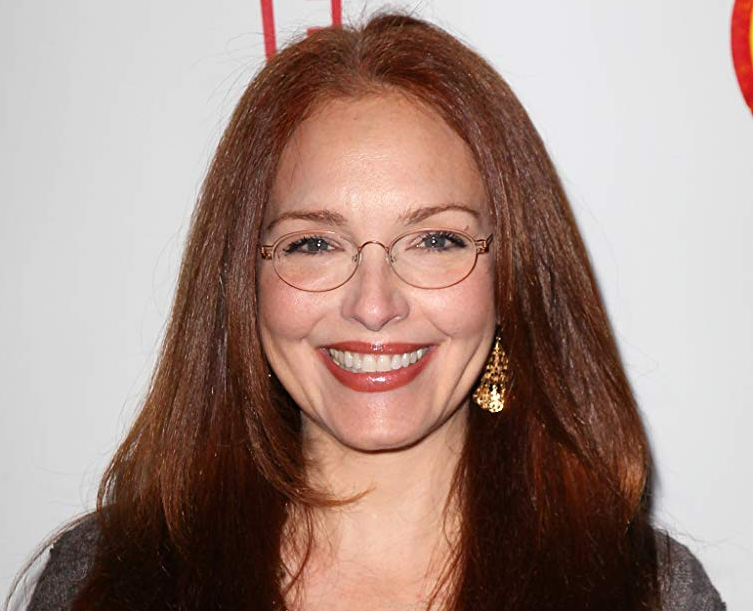 Amy Yasbeck is a renowned name in Hollywood who is best known for portraying the role in the movie ‘Problem child’ and ‘The Mask’. Also, many people recognized her fro playing the role ‘Casey Chappel Davenport’ in the series ‘Wings’.

Moreover, she is also popularly known as the widower of the late comic actor John Ritter. Additionally, her only child with John, Stella Ritter has successfully transformed her gender to male and named as Noah Ritter in 2017. Let us together discover information about the talented and renowned American actress.

Yasbeck was born on 12 September 1962, in Blue Ash, Ohio, the United States as Amy Marie Yasbeck. She was born as the daughter of Dorothy Louise Mary and John Anthony Yasbeck. Her father was a butcher and grocery store owner and mother is a homemaker. After the death of both parents, she moved to New York City.

She had attended and graduated high school education from Summit Country School and Ursuline academy. Then she went on to join the University of Detroit and studied theatre. Additionally, in her childhood days, she was featured on the cover of the Betty Crocker Easy-Bake Oven.

Before starting career professionally, she had been already worked in commercial in her childhood days. Many years later in 2000, she again worked representing new Easy-bake oven on the show ‘I’ve Got a Secret’ and became a regular for the panel. In her early career days, she has played a role ‘Sonia Petrova’ in the unsold CBS television pilot ‘Rockhopper’ in 1985. After that, she made landed the role of ‘Olivia Reed’ in American daytime series ‘Days of Our Lives’.

Thereafter, she has appeared in various series and drama. It includes ‘Dallas’, ‘Werewolf’, ‘J.J. Starbuck’, ‘Magnum P.I.’, ‘China Beach’, ‘Poochinski’, ‘The Cosby Show’, ‘Designing Women’, and ‘Bones’, amongst others. Further, she has always fantasized about the mermaid in her childhood days. Hence, she got to portray the role of the mermaid in the Disney TV movie ‘Splash Too’ in 1988.

Furthermore, she has a starring role in movies like ‘House II: The Second Story’, ‘Problem Child’, ‘Pretty Woman’, ‘Problem Child 2’, and ‘The Mask’. She has played twice in the movie directed by Mel Brooks Robin Hood: Men in Tights’ and ‘Dracula: Dead and Loving It’.

Coming over to the personal life of the actress, she is a widower of the actor John Ritter. She has worked in several projects along with her late husband. She met Ritter first at the house of director Dennis Dugan’s house during the read-through of their first project ‘Problem Child’. Together, they had appeared in an episode of ‘The Cosby Show’ and ‘Wings’. While in a relationship, they welcomed their first child Stella Ritter in September 1998. Later after one year on 18 September 1999, the couple tied a knot at Murphy Theatre in Wilmington.

But on the fifth birthday of their child, ritter fell into Coma and taken to hospital by paramedics. However, because of the wrong diagnosis, Ritter died that night. He was thought to be suffering from a heart attack but the actual cause of his death was an aortic dissection.

After the death of her husband, she filed a wrongful death lawsuit of $67miilion against Providence Saint Joseph Medical Center. Also, several doctors who attended her late husband. However, the court settled for a total of $14 million including hospital’s $9.4 million.

Currently, it is believed that she is in a relationship with the attorney Michael Plonsker. The news was confirmed after the fourteen years after Ritter’s death. The two come close as event and time passed on, also he stood up brilliantly by her side in all unbearable circumstances.

Actress Yasbeck has worked very hard to achieve a successful career. Therefore, she has made a good amount from her acting career. Her net worth has an estimation of around $5 million.

Besides, she also sold her Beverly Hills house worth $6.55 million which was bought at $2.55 million back then. Also, she got the court settlement of $14 million.

Her fans and followers also follow her on different social media platforms. There she shares the pictures of her lavishing lifestyle. She has an Instagram account @yesbeckamy with over 3.3k followers. On Twitter, she has the account @AmyYasbeck4real having over 4.5k followers. But she does not seem to be active on Facebook.

The beautiful actress having attractive blue eyes and long red hair. She has an average height of 5 feet 7 inches or 1.701 meters and weighs around 54 Kg. Her perfect and well-maintained body has a measurement of 34-25-35 inches.