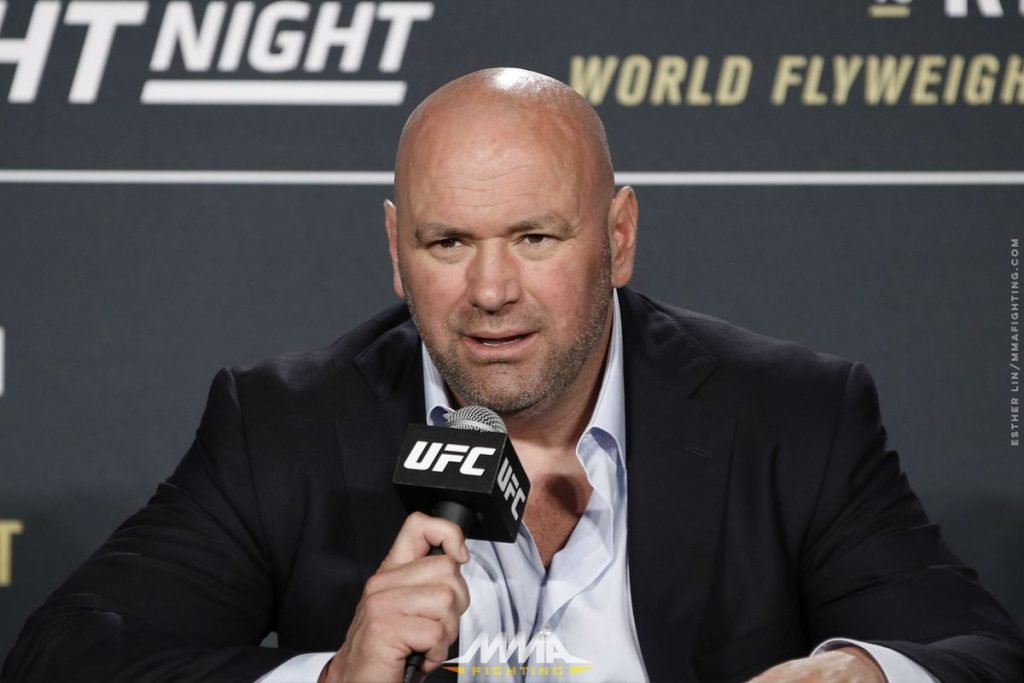 Dana White is an American leading businessman who is the president of the Ultimate Fighting Championship (UFC).  The UFC is an American Mixed martial arts-based from Las Vegas. He is also a philanthropist.

Dana began his career as an amateur fighter. Later he started to manage the fights and gyms. Basically, we can say that he is the brain behind UFC. He had achieved a lot throughout his career and is hoping for more success. He had also won many awards and titles.

Dana White was born on 28th July 1969, in Manchester, Connecticut, the US which makes his nationality American. He, however, belongs to Irish/white ethnicity. Dana’s birth name was Dana Frederick White.  He was born to father Dana white Sr. and mother June White. He was raised alongside his sister Kelly White.

In 1987, he graduated from Hermon high school, in Maine. He was very much interested in boxing from an early age of 17. He also attended the University of Massachusetts for a year and dropped out. In the meantime, after dropping out from the university, he introduced inner-city children’s boxing program. He also worked as a bouncer, trainer and even in a hotel as a hotel valet. While standing in a lobby, he was thinking that “what am I doing here?”.  He says that he got pretty good amounts during his time as a valet. He further added, he quit his job to pursue his dream job.

In an interview for a Forbes, he says that he had left everything he had and moved to Las Angeles and never looked back.

“That thing went down where they were trying to get money from me, and I got the phone call one day, and they were basically like, ‘You’ve got until Sunday to pay us’… [And] I left everything I had,” he says.

In 2oo1, Dana with other two partners bought UFC when it was on the verge of bankruptcy. They also formed company Zuffa and LLC and he was appointed as president for the organization. In 2016, UFC was sold to an unknown name for $4 billion dollars but in one condition that he would continue as president. He had expanded UFC world widely and know in most of the households.

Dana White got married to his wife Anne White in 1996. They both went to the same high school and started dating. After dating for many years they tied a knot. The couple has three children- Dana White Jr. and Aidan White (sons) and Savannah White (daughter).

On May 12, 2011, White’s mom June White has published a book called “DANA WHITE: king of MMA, an authorized biography“. White is also involved in good deeds for the welfare of others. Like, in 2011, he had donated $100,000 to his high school for athletic facilities. But this good-hearted man was diagnosed with a disease called Meniere; this disease is the disorder of inner ear.  For the first time in his 11 years career in 2012, he missed the promotion of Tuesday fight.

Talking about his net worth, he earns a huge amount of salary.  His net worth is $500 million dollars. Dana has 9% shares of UFC. From these shares, he makes almost $360 million annually. As a President of UFC, he gets $20 million as a part of his salary; apart from this also he gets 9% of the profit for 5 years.

In 2006, in Las Vegas, he had bought a mansion for $1.9 million. He also bought 2 more houses for $2.4 million and $2 million respectively. We can also see many collections of the cars in his garage. Some of the luxury/sports cars that Dana owns are Range Rover, Ferrari, Bentley, and has motorbikes too. In 2017, he gifted BMW car to his son Dana and even hired Kendrick Lemar for the birthday party. Recently in 2018, he has celebrated his son’s 16th birthday party and spent over $ 1 million dollars.

These things aren’t easy to roll but @aidan_white_ figured it out real QUICK!!!! #maine 😝

He is highly active in Social media platforms and promotes the events of UFC fighting match through these platforms. He has 3.2M followers on Instagram, 4.88M followers on Twitter and around 2M on Facebook.