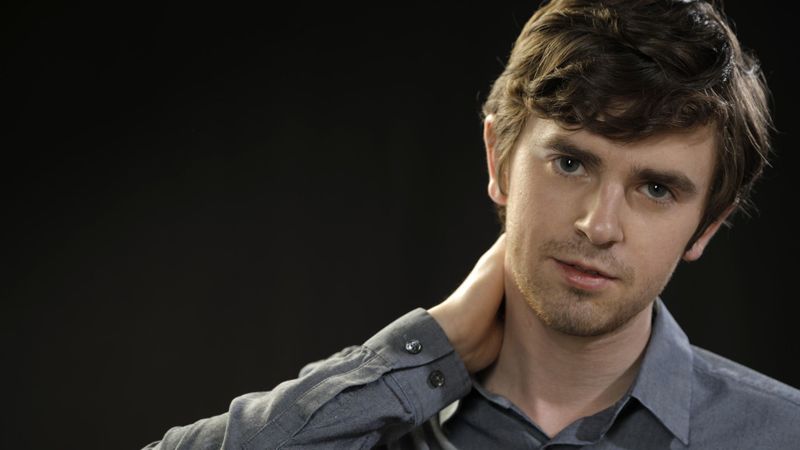 An English actor, Freddie Highmore, people started noticing him after they watched him in 2005 fantasy movie ‘Charlie and the Chocolate Factory‘. He played the movie alongside ‘Johnny Depp’ while he was just a 12-year-old kid.

However, that is not the only movie that he played while he was a kid. He first started with 1999 British comedy ‘Women Talking Dirty’ as Sam when he was only 7. Apart from being a successful actor, he is also a producer, director, and writer.

Who is Freddie Highmore?

To begin, Freddie’s birth name is ‘Alfred Thomas Highmore’. He was born on 14th of February, 1992 to Edward Highmore and Sue Latimer, in Camden Town, United Kingdom.

He went to an elementary school in Hampstead Garden Suburb in the London Borough of Barnet. Highmore also attended Highgate School later on. Speaking of college, he went to Emmanuel College, Cambridge at St Andrew’s Street.

How did Freddie Highmore’s Career Start?

It was the year 1999 that he made his first big screen debut in the comedy movie called ‘Women Talking Dirty’. Highmore once expressed in an interview, “I started off doing small parts on TV, and then, the movies came along“. So, the reason why he’s so successful would be how he followed his passion from an early age, and how he was consistent throughout his journey.

Later on, he played small roles in ‘Happy Birthday Shakespeare’ in the year 2000 and ‘I Saw You’ in 2002. Later, Freddie also played young ‘King Arthur’ in the American television drama called ‘The Mists of Avalon’ in 2001. And this is how it all started. After playing several TV shows and movies, people started noticing him, and he bit by bit began getting mainstream movie contracts.

In 2004, Highmore portrayed a role in a family adventure movie called ‘Two Brothers’ directed by ‘Jean-Jacques Annaud’. In the same year, he got another fantasy movie called ‘Five Children and It.

Also, in 2004, he made his breakthrough as ‘Peter Llewelyn Davies’ in a semi-biographical movie called ‘Finding Neverland’ directed by ‘Marc Forster’. He portrayed the role alongside top actors ‘Johnny Depp’ and ‘Kate Winslet’.

In the year 2005, Freddie Highmore played the main character in ‘Charlie and the Chocolate Factory’ directed by ‘Tim Burton’. That was the second movie he played with Johnny Depp.

Moreover, Depp was so impressed that he reportedly recommended Freddie, and he was also the one who put his name forward for the role ‘Charlie’.  So, from these movies, he was starting to get noticed all around the world.

Freddie Highmore’s Other Movies and Voice Over

Moreover, he did voice over for several popular animated movies, they are: ‘The Golden Compass’ in 2007, ‘A Fox Tale’ in 2008, ‘Astro Boy in 2009, and  ‘Justin and the Knights of Valour’ in 2013. Nonetheless, he also did a voice-over for many video games like ‘Charlie and the Chocolate Factory’, Arthur and the Invisibles’, ‘The Golden Compass’, ‘The Spiderwick Chronicles’, and Astro Boy: The Video Game’.

Freddie Highmore’s Net Worth and Salary

He has been active with his movie career ever since he was a kid, so, his net worth has skyrocketed over the past few decades. Research suggests that his net worth is somewhere around $4 million. Though this is just an approximate amount, his net worth or salary might be more than we can think of.

According to payscale, actors or actresses get $17.00 per hour for a movie, and if you calculate it, they might earn $81,000 per year on average. However, this is not an exact sum and it varies from actor to actor. Some big shot or popular actors might not agree with the per hour system and they’d put their own rates. So, it’s not certain.

Nonetheless, Highmore is not just an actor, he’s a director, producer, and a writer too. So, he generates his income not just from playing movies, but also by directing or producing them too.

In 2017, he produced and portrayed in the ‘ABC’ series called ‘The Good Doctor’. He was nominated for the ‘Golden Globe Award’ for best actor for the role. Later, he received several nominations and awards for his role in ‘Finding Neverland’. He won ‘Critics’ Choice Movie Award’ for the best young performer, and was nominated for ‘Saturn Award for Best Performance’ by a young actor, and ‘the ‘Screen Actors Guild Award’ for outstanding performance by a male actor in a supporting role.

Moreover, for the movie ‘Charlie and the Chocolate Factory’, Highmore won the ‘Critics’ Choice Movie Award’ for best young performer’ again, and ‘Satellite Award for Outstanding New Talent’. And last but not least, he received a nomination for the ‘Golden Globe Award’ for best actor in a drama series called ‘The Good Doctor’.

First off, speaking his Instagram or Facebook, he avoids all kinds of social media, and he wouldn’t share his personal information with the outside world. However, he resides in London at present. Also, he is a ‘Godfather’ to Fynn Hawkey’ son of co-star ‘Vera Farmiga’ and ‘Renn Hawkey’.

Over a decade or less, he has dated a few women. The first would be Irish actress ‘Sarah Bolger’. He dated her from 2006 to 2009. After their split, and after almost 7 years, he started seeing Abigail Breslin. Some sites believe that he dated her from 2016, and they’re still together.