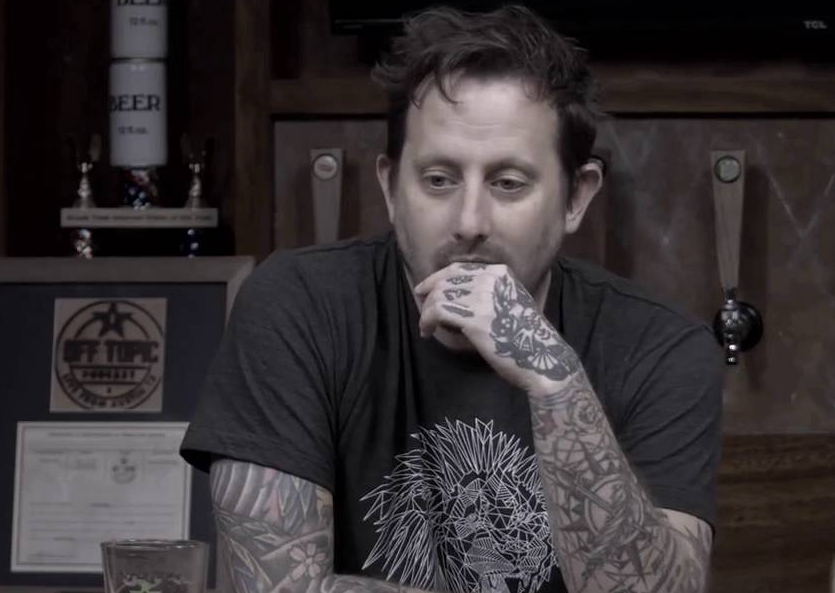 Geoff Ramsey is the co-founder of the production house ‘Rooster Teeth’ and Achievement Hunter. In 2003, he c0-founded the company along with Burnie Burns, Gus Sorola, Joel Heyman, Jason Saldana, and Matt Hullum. He began to work with the web series ‘Red vs Blue’ created by Burnie Burns. In addition, Ryan Haywood worked in the 10th season of Red vs. Blue.

Apart from this, Ramsey is a multi-talented personality who is a filmmaker, producer, screenwriter, comedian, internet personality, actor, and voice actor too. Besides, he is also a podcaster which he presents with his wife and other co-founders. In addition, his daughter, Millicent Ramsey has also begun to follow the footsteps and have become a popular gamer and internet personality.

Geoff was born on 19 June 1975, in Mobile, Alabama as a Geoffrey Paul Fink. In his early days, he has moved to different places of  Southeastern of the US including Florida and Alabama. He completed his high school in Alabama and enlisted himself into military service while he was still in high school.

As soon as he graduated, he joined the US Army training camp in Fort Jackson, Columbia, South Carolina in 1993. There he served for five years as a photojournalist in Kuwait. Before locating to Fort Monmouth for his final year of service, he was posted in the US military in Killeen, Texas.

After serving five years in the US military, he co-founded the Rooster Teeth Production house along with other members. In 2003, he started his career with Rooster Teeth’s sci-fi comedy ‘Machinima’ series Red Vs Blue as a voice of the character Dexter Grif. After then, he has become a popular internet personality and appeared at conventions like PAX and Com Blue. He has also voiced for the character ‘the Omnipotent Voice’ of the series ‘The Strangehood’. Other projects that he has given his voice; 2008 ‘Captain Dynamic’, lab rat in ‘Immersion(2010)’, and Rooster Teeth Productions (2009-present), amongst many more.

Ramsey started project ‘Achievement Hunter’ along with his colleague Jack Pattillo in 2008. It is a department of Rooster Teeth Productions which mainly deals with the video games. Further, initially, it consists of two members (Ramsey and Pattillo), as of now, it has thirteen members. Originally, it focused on achievement guides and easter egg on the video games but now it also shows the comedic videos ‘Let’s Play’. In 2018, The productions have launched it’s first pop-up store which sells the merchandise like hoodies, bags, and shirts designed by Ramsey.

A multi-talented personality is a happily married man. He has married a chainsaw carving artist, Griffon O’Connell. But there is not much information on his past relationship or his first meeting with his wife. However, the duo tied a knot in June 2005. The couple welcomed their only daughter, Millicent Ramsey. After 12 years of marriage, Griffon announced their separation on Twitter in November 2017. Following year, Ramsey also announced that the couple has divorced on YouTube in a video of Let’s Play.

Twelve years tomorrow. Until then, @builttospill

His daughter, Millicent(Millie) Ramsey is also an internet personality just like her father and YouTube gamer as well. She was born on 23 September 2005 in Texas, the USA. She has appeared alongside her parents in the videos made by her father. Also, she plays games on the collaborate Youtube channel ‘Game Kids’. However, she became popular when she appeared with her parents playing Minecraft-Play Kids on Game Kids YT Channel.

The Alabama-born Machina producer has earned a good income from his co-production house and others. He worked as a filmmaker, producer, screenwriter, comedian, internet personality, actor, and voice actor as well. Therefore, we can say that his earning must be in six figures. His net worth ahs an estimation of $3 million as of now. Also, he became a merchandiser and launched a pop-up store through Rooster Teeth production in the year 2018.

Being an internet personality, he is highly active over social media platforms. Furthermore, he keeps updated with his followers through the videos on Youtube Channel of the productions. He has the Twitter handle @GeoffRamsey with 561K followers. On Instagram, he has the account @geofframsey with 278K followers. On Facebook, he uses the account under @geoffraseyrt with over 42K followers.

Geoff has a slim body type with a tall height of 5 feet 10 inches or 1.78 meters. He has a body weight of 75 kg but didn’t disclose the body statics. He has brown hair and eye color.

The voice actor is also known for his body tattoos, particularly that are on his hand and arms. Further, he loves tattooing so much that he has explored the subculture of tattoos and also took a course on it. Also, Geoff shares the stories of his tattoo with his daughter saying that it is a roadmap, drawing paths between different moments of his life. When his daughter asked them why they want the tattoos that badly.