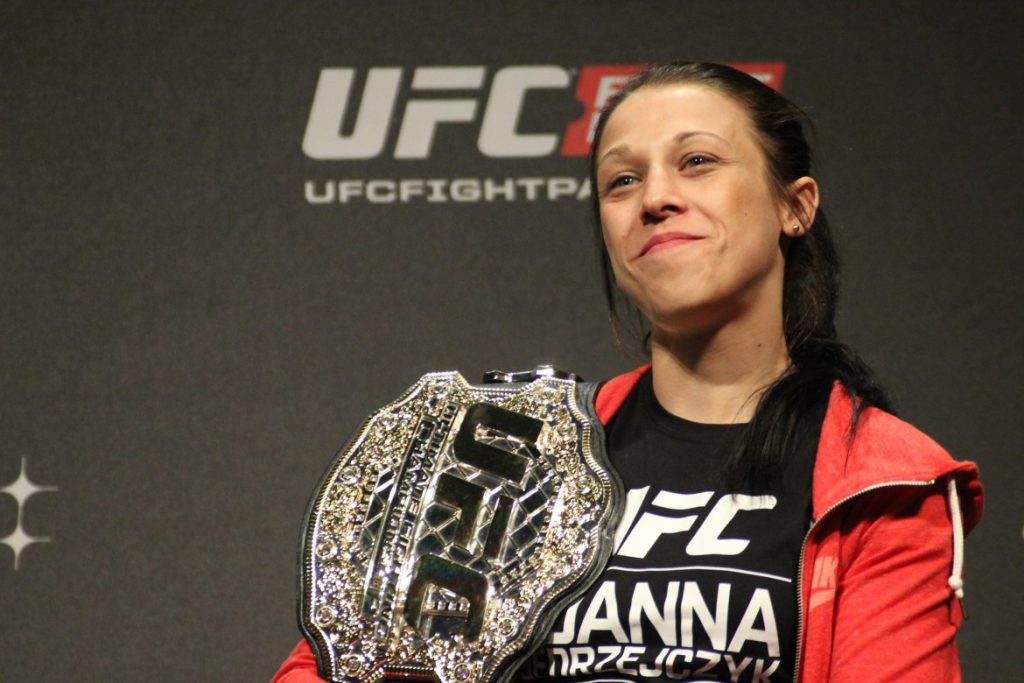 Joanna Jedrzejczyk is a Mixed Martial Arts (MMA) fighter like Nate Diaz who became for her kickboxing styles. Jedrezejczyk started her career in 2012 where she defeated Sylwia Juskiewics. However, she made her UFC debut in July 2014 where she again defeated Juliana Lima. In 2015, Joanna went on to win the Ultimate Fighting Championship (UFC) Women’s Strawweight Championship after defeating Carla Esparza on March 2015.

She then became the fighter of the night in June 2015 when she defeated Jessica Penne and again accomplished the same feat in 2016. Currently, Joanna Jedrezejczyk is the only Polish UFC Women’s Strawweight Champion. She is also the third European UFC champion in all category and the first female European UFC champion. Currently, her MMA record stands at 15 wins and 2 defeats. Let us now get to know more about this tough fighter.

Joanna Jędrzejczyk was born on August 18, 1987, in Olsztyn, Poland. She is Polish by nationality and is ethnically a mixed European white. She has an older twin sister called Katarzyna.

Joanna was only 16 when she started her Muay Thai classes while still studying in high school. At first, she only joined the class to lose weight and also become good looking. After only 16 months of training, she won in her first competition. This is when she knew she was good at it and then wanted to do it. Her surname has always been difficult to pronounce for her fans. Because of this difficulty, fans have nicknamed her Joanna Violence and Joanna Champion.

Joanna has been competing in Muay Thai for over 10 years now. She has won 70 matches acquiring 4 amateur European Championships and another 5 World Championship. At a professional level, she has now won 27 matches, losing only twice. This 31-year-old has been achieving a lot in such a short time and has many trophies to her name like IFMA and WKN World Championships, WMC Championship, J-Girls Championship, etc.

Joanna Jedrzejczyk has not shared a lot of her personal life with the media and her fans. She is not a married woman but is reportedly in a relationship with Przemyslaw Buta. Przemyslaw is a Morag, Olsztyn, Poland resident and is a soccer player by profession, having played for KS Huragan Morag. She first revealed her boyfriend to the public when she won the UFC 205 event against Karolina Kowalkeiwicz.

Currently, Joanna is engaged to her boyfriend turned fiancé Buta and they are believed to be leading a beautiful life together. She in a press conference after her UFC 211 appearance revealed that she would want to experience marriage as well as motherhood in the near future.

Joanna remained undefeated till UFC 217 and defended her title for five successive years. She obviously is a huge pay-per-view-draw and as of today, her net worth is believed to be around $3 million. She is also active on social media with over 1 million followers on Instagram and 257k followers on Twitter.