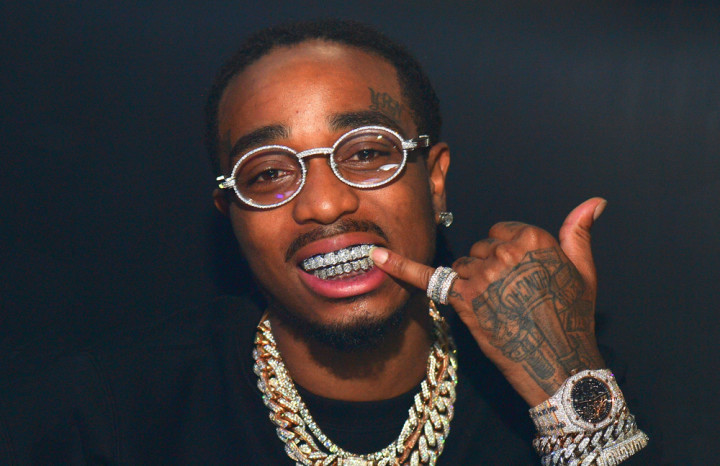 Quavo belongs to one of the most controversial band ‘Trio Migos’ in the USA. The American singer, rapper, songwriter and record producer Quavious Keyate Marshall got himself the stage name ‘Quavo’. The rapper is best known for the debut ‘Versace’ from Y.R.N. Other hits of the Migos constitute Yung Rich Nation, Culture, Champions and such.

Quavo together with Takeoff and Offset (both stage names) founded the hip-hop trap music Trio Migos. The name has a meaning, Migo comes from ‘Amigo’ that means friend. The three are in fact a family, Takeoff being Quavo’s nephew and Offset his cousin. Migo also refers to a house that deals with cocaine in the Afro-American community.

Quavious Keyate Marshal was born in Athens Georgia in 1991, April 2. While he lost his father when he was barely 4 or 5, he was solely raised by his mother Edna Marshall who is popularly known as mama Huncho. Besides, Offset and Takeoff grew up together with Quavo under the guardianship of mama Huncho.

Quavo attended Berkmar High School in Lilburn, Georgia. For his skills in football, he even earned a scholarship. But for reasons unknown, which, however, later turned to be the right decision, he dropped out of school in 2009.

Soon as he left school, Quavo with his fellow members formed Migos but initially after the Polo brand. It was later that they named the group Migos.

Their first mixtape Juug Season released in 2011 after two complete years of being underground could not bring good results. Later in 2012, they had another release ‘No Label’ which was again a failure. The team, however, did not give up.

With the 2013 Debut, ‘Versace’ from Y.R.N. Migos found their first success. The song was also remixed by Canadian Rapper Drake which happened to come 99 in the Billboard Hot 100. Then followed their debut album Yung Rich Nation in 2015.

In 2017, Migos let out their second album Culture followed by Culture II in 2018. Moreover, they plan on releasing Culture III in 2019. Quavo’s solo Champions stood Billboard’s 71.

Apart from Migos, Quavo has featured in music by popular artists namely Travis Scott, Drake, DJ Khaled. He was voted 2014’s most influential rapper by Complex Music. In addition, Quavo has released an album together with Travis Scott, the name of the album is Huncho Jack.

In spite of his exploring with other artists, Quavo is a dedicated member of Migos. Yet he doesn’t like people comparing him with the fellow members.

The 2015 Georgia Southern University Concert Incident got the three and escort members arrested for possession of marijuana and firearms. Quavo and Takeoff were released the following day while Offset was kept in custody for 8 months.

The American model, socialite, and actress, Karrueche Tran (ex-girlfriend) of pop star Chris Brown, has dated Quavo for quite some time. However, the public spatting between the pop star and the rapper would not let their relationship go smooth. Additionally, he reportedly dated briefly with Lira Galore as well.

We can spot the singer with fellow rapper Saweetie more frequently these days.

Quavo’s family is his Migos and most importantly his mom. Mama Huncho is a proud mother very much loved and cared for by her son and grandson. Quavo and Takeoff have gifted her a house on the occasion of Christmas. Furthermore, the three Migos live together in their mansion in Atlanta.

The group collectively earns a sum of $10 million. With this, they own mansions in Atlanta as well as in Canada. Quavo lives an enviable life for which the three have also been guilty of showing off.

The 28 years old ‘Migo’ is 6 feet and 1 inch tall. He has inked different parts of his body. One of his prominent tattoos includes one right over his left eyebrows that says ‘YRN’. Y.R.N. Young Rich Niggas is Migos’ mixtape.