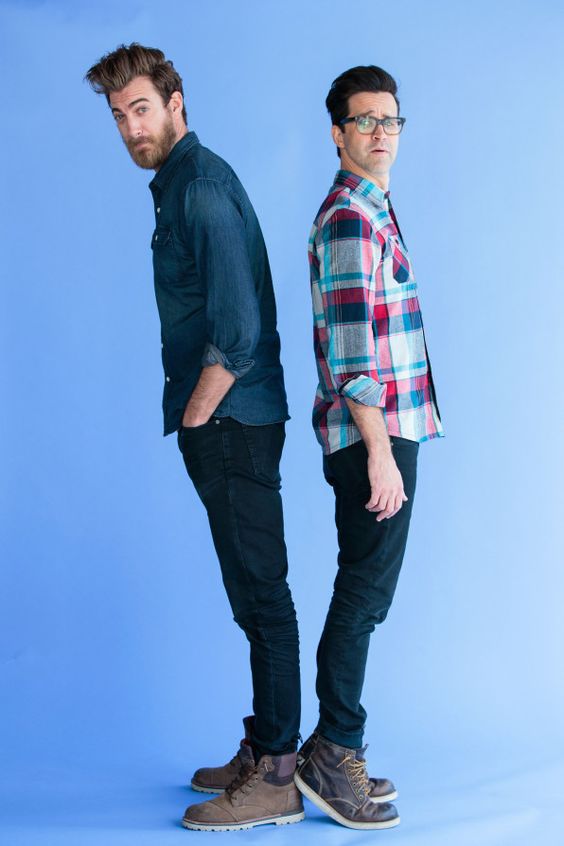 Rhett and Link sound a bit like a computing term but it is non-other than a famous comedy duo and a pair of YouTubers. They are especially known for their viral videos, morning talk show, comedy songs, and ten episodes series.

The Duo refer themselves as ‘intertainers’, a combination of words ‘internet’ and entertainers’. They released a documentary called ‘Looking For Miss Locklear’ in 2008 where they tried to find the teacher in whose class they met for the first time, isn’t that interesting?

Looking at something interesting in Melbourne. Come see us Friday night on the #tourofmythicality

Rhett and Link, both are originally from North Carolina. Charles Lincoln ‘Link’ Neal was born on June 1, 1978, while Rhett James McLaughlin was born on October 11, 1977.

They first met September 4, 1984, and started their first grade together at Buies Creek elementary school in North Carolina. Apparently, this meeting was very precious for them as they have made a movie as well as a song about it. Rhett and Link had to stay in during recess because they wrote swear words on their desks. During the periods they colored mythical creatures and it inspired their YouTube Channel name- Good Mythical Morning.

I’ve known this guy for 34 of his 40 years. FORTY. Yes I said FORTY. That’s twice as old as a college junior and thrice as old as an eighth grader, and while I don’t know the linguistic equivalent of thrice for four and beyond, that’s four times as old as a fifth grader, five times as old as a third grader, and 6.66 times as old as a first grader (which is a little creepy because that’s the devil’s number). Point is, I’ve known this human at each and every one of those times in his life, and he’s been my best friend all along. He’s funny, smart, thoughtful, original, and weird (and sometimes a little stupid but it REALLY works for our brand). Here’s to 34 more years. After that we’ll both be 74 and we can reevaluate our friendship. But until then, happy birthday Link. Love you.

The two have remained close friends ever since. While at the age of 14, they got a head start on their creative careers by writing a screenplay together which was titled ‘Gutless Wonder’. They even began shooting the movie for it. But they only went for a couple of scenes and ‘Gutless Wonder’ remains incomplete to this day. However, fragments of the screenplay have been read a couple times on the show- Good Mythical Morning.

Next, they both attended North Carolina University for their further education.

Link was the first one to get married in 2000 to Christy White. They are now parents of three children- Lilian, Lincoln, and Lando.

While on the other hand, Rhett got married in 2001 to Jessie Lane. They are now parents of two children- Shepherd and Locke.

Rhett and Link are now living in Los Angeles with their family. Both the family seems to be living a healthy and happy life.

In the middle of a very dad moment where I tried to make the kids think I was going to push them into an electric fence. Photo credit: the recently verified but still inactive @linklamont

Rhett and Link Net Worth

The duo together worth $16 Million, $8 million each. Although, Both of them are pretty old to be YouTubers they have worked hard and consistently to make their mark and their efforts have actually paid off well.

Rhett and Link have received sponsorship for numerous big brands for a lot of their videos. They earn quite a money by making the funny yet viral advertisement for many companies including Ojai Valley Taxidermy and Red House Furniture.