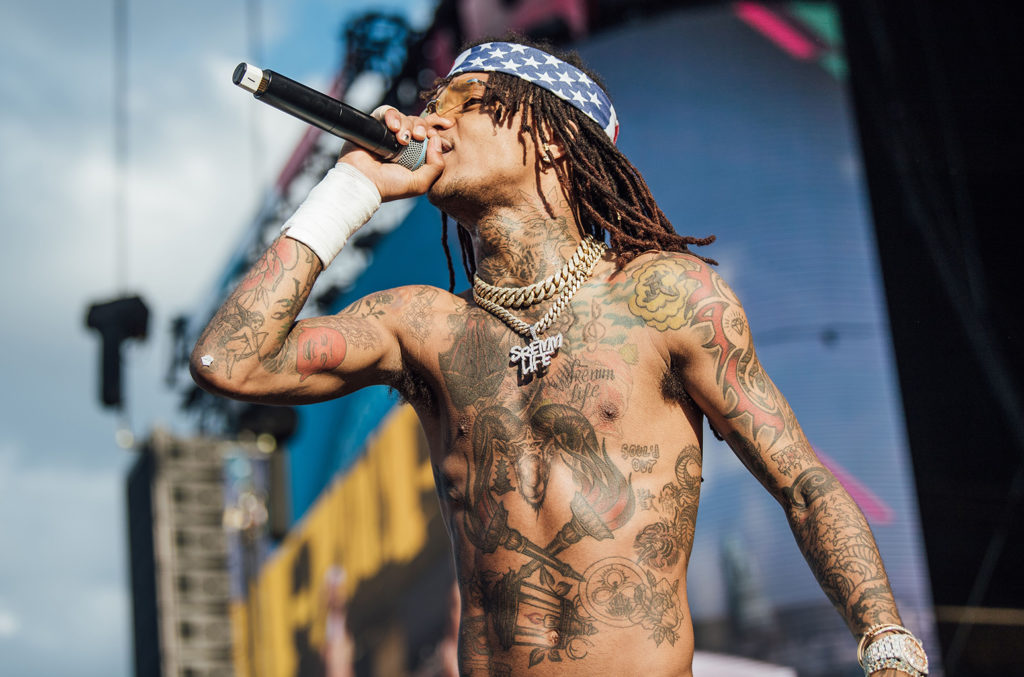 Khalif Malik Ibnshaman Brown or Swae Lee is an American record producer, singer, songwriter, who is famous as one of the up and coming talents in the Hip-Hop music industry. You might also know him as one half of the hip-hop duo Rae Sremmurd where he performs alongside his brother Slim Jxmmi.

The two brothers have been famous for singles like “No Type” and “No Flex Zone”. With some of these hits, Khalif has been one of the biggest rappers in the country. Moreover, he is constantly growing as an artist and is finding more fame and fans in the industry. Let us now get to know a bit more about this rapper, shall we?

Swae Lee was born on the 5th of June, 1995, in Inglewood, California, America. He was born to Bernadette Walker, who was a single mother. As per reports, Kalifs’ father walked away from the family soon after his birth, so we have very little to share on that regard. However, we do know Lee also has a brother who goes by the name Slim Jxmmi. His mother Bernadette worked with the US Army and Lee had to move frequently because of his mothers work. Swae grew up in various states like Texas, Mississippi, and Maryland.

Now looking at his academics, Swae completed his higher schooling from Mississippi. Lee was, however, never really making effort in his education. He had a passion for music and wanted to do something about it.

After graduating from his high school, Lee began working at McDonald’s to make the ends meet. He had to work really hard and for almost 12 hours per day. However, even after working 12 hours in a single day, he would go to parties to perform. Whilst these initial days were a bit of a struggle for Lee, he was continuously striving to find a better place for himself.

Later Swae and his brother Slim signed to Mike Will Made- It’s “Label EarDrummers Entertainment” as Rae Sremmurd in 2013. The brother released their first single “We” in the same year. Ever since, they have been able to find significant fame and a large fan base. The brothers have also gone on to release two studio albums under the label, “SremmLife” and “SremmLife 2”. Next, their single “No Flex Zone!” was able to peak at #36 on the US Billboard Hott 100 chart. Moreover, it also landed in the top 20 of the US R&B and US Rap charts. In more recent months, he has been able to find massive fame for the song Sunflower that he sang with Post Malone.

Now looking at the personal aspects of Lee’s life, he has been pretty quiet about his relationships and affairs. Whilst many have questioned his sexual orientation, it is pretty safe to say that Swae is a heterosexual man. We have had several reports suggesting that Swae is in a relationship with the Instagram model, Marliesia Ortiz. The model has almost 25k followers on Instagram and is pretty famous in show business.

Despite having been together for quite some time, Swae and Marliesia keep having this on-again-off-again relationship. Clearly, the two are having some problems figuring things out. In more recent years, Ortiz was on the news for accusing Rob Kardashian’s ex-fiancee, Blac Chyna, of performing oral sex on Swae.

Swae Lee’s story of rising into prominence is a quite famous one. From a humble beginning, this artist has gone through a dramatic transformation and is one of the more established rappers in Hip-Hop. He is also one of the highest earning musicians in the industry and reports suggest that he has a net worth of $3 million. For such a young musician with tremendous potential, he certainly has an amazing career ahead of him.

The young rapper is also pretty active on social media platforms. He likes to share some aspects of his personal and professional life to his fans on Instagram. You can too find him on the platform under the handle @swaelee where he has a staggering 6 million people following him.