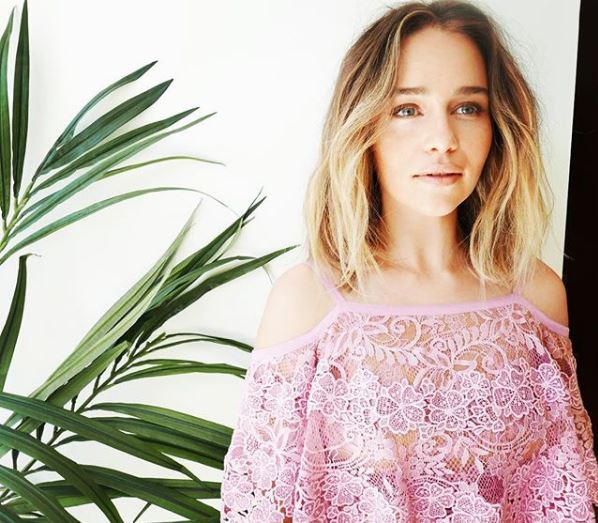 Emilia Clarke is an English actress who found fame after her major role in the HBO blockbuster series ‘Game of Thrones’. Clarke, the daughter of a theatre sound engineer was exposed to this industry ever since an early age. Having seen the ins and the outs of acting, she went to the Drama Centre London to study. There she was performing in many different stage productions like ‘Breakfast at Tiffany’s’. Het TV debut came not so long after, in the form of a guest role in an episode of a soap opera, ‘Doctors’.

After having worked for various small productions and roles, Emilia’s big break came in the year 2011. Her breakthrough role as Daenerys Targaryen alongside Sean Bean in the HBO series ‘Game of Thrones’ made her an in-demand actress in no time. For her performance in the series, she has been able to win several awards and nominations and more importantly, the world knew her name. Soon, Clarke was getting roles in some amazing movies like ‘Me Before You’, ‘Solo: A Star Wars Story’, etc. Let us now get to know more about this amazing actress.

Hopped on a boat to an island to say goodbye to the land that has been my home away from home for almost a decade. It’s been a trip @gameofthrones thank you for the life I never dreamed I’d be able to live and the family I’ll never stop missing #💔#lastseasonitis

Emilia Isabelle Euphemia Rose Clarke was born on the 23rd of October in 1986. The English actress was born to Jennifer Clarke, while her father’s name is a mystery. Clarke grew up in Berkshire with her younger brother. Clarke’s father, who passed away in 2016, used to be a theatre sound engineer and he was the one who introduced Emilia to acting. Her mother, on the other hand, was a businesswoman and the director of ‘The Animal Foundation’, which works for charitable causes.

For her education, Clarke went to Rye St Antony School in Headington. She later attended the St. Edward’s in Oxford for her secondary education and next joined the Drama Centre London. At the institution, she had been doing several stage performances before graduating in 2009. After, graduating, Emilia was auditioning and looking for many different jobs. She during the time, was working as a real estate agent, waitress, and a bartender to make the ends meet.

In 2009, Clarke made her debut in an episode of the British soap opera, ‘Doctors’. She made her movie debut 4 years later in the film Spike Island. The beautiful Emilia has also worked on movies like Triassic Attack and given her voice for animated movies like Robot Chicken and Animals. She did have to wait a while before getting a major role. However, she did get her breakthrough role of Daenerys Targaryen after replacing Tamzin Merchant, who was originally cast for the role.

🚨Come meet me on the Game of Thrones set!! That’s right don’t choke on your cornflakes this ain’t not hoax—you, me and a behind-the-scenes sneak peek. Just bend the knee (obviously a pre-requisite) and click that link in my bio or go to omaze.com/got to enter! Plus, every donation supports the fantastic incredible much needed work of the Royal College of Nursing Foundation. 🔥👸🏼 🐉 🚨 #youknowyouwantto #lunchfortwo #couldbeyou #bendthekneeneverlookedsoeasy #❤️ #motheroftoyourleftyouwillseethefamoussetof.. @gameofthrones @thercn @omazeworld

This role made her a prominent name in the industry and she was able to find fame beyond her wildest dreams. Her performance in the series earned her positive reviews. She even won the Emmy Awards for Best Supporting Actress in a Drama in 2011. Next, she made her appearance in the sci-fi movie Terminator Genisys. For the movie, she was playing a feisty character, Sarah Connor. After being cast for the movie, she had to be trained to shoot and fight and her performance got the thumbs up from the legendary Arnold Schwarzenegger himself.

Wait….. did I NOT tell you guys?! Um yeah. Now if he'd only bend the bloody knee there'll be no problems….. 🔥💃❄️🕺 #modragonsmoproblems #igot99problemsandjonsnowisone #whichroundsmeupto100problems #youknownothingjonsnow

More recently, in 2016, her movie ‘Me Before You’ became a massive hit. She played the role of Louisa Clark for the romantic movie and her portrayal was loved by many and this earned her acclaims from the critics.

Clarke is not someone who likes to share her personal life with the media. However, in 2012, she was dating the famous director and the animator Seth MacFarlane. But the relationship did not seem to work for them; even when many of their friends expected them to marry. The young couple sadly split up in less than a year. There have also been rumors about Emilia dating Kit Harrington, a co-star from Game of Thrones. However, this rumor could not be further from the truth.

Clark is a creative individual and believes that she could have made it even if she was not an actress. She thinks she would have been a graphic designer or an architect. This British actress for her amazing role in the Game of Thrones won an Emmy Award and has many other nominations.

What up instaworld… it’s your absolute LAST CHANCE to come hang with me on the Game of Thrones set in Belfast!!! Because I’m such a kind and loving leader, I want YOU to get an extra 100 entries with the promo code KHALEESI. 🔥Now, don’t leave your dragon mamma waiting…..ENTER with the link in my bio or at omaze.com/got And yes, the pooch (Molly) is my dragon replacement when I’m not filming. Not quite as fast but you should see her carry me home… OH WAIT YOU COULD IF YOU ENTER THIS COMPETITION!!!!!!! 😎🚨👏 #doitforthedragons #itslamosttimeforawinner #mynewsunandstars? #saverofnursesandbringerofjoy #awinnerhasanewname #anditcouldbeYOURS! #boombaby #❤️ #😎 #🙌

The recent success for beautiful Clarke’s has earned her an international recognition. This comes with perks like endorsement deals with top fashion brands such as Versace, Dior and Louis Vuitton. In 2015, she made her first appearance on Vogue as a cover girl.

“The mother of dragons” currently has a net worth of an astounding $34 million. According to reports, she made about $1 million per episode while filming the HBO series Game of Thrones. With that money, she probably is up there with the highest paid actors in TV series history.

TOO MUCH JOY TO FIT INTO ONE PHOTO?! Kauai… oh me oh my you sure look perty from way up in the sky… ✌️ #thisfacecanthandlemuchmoregrinning #holidayofdreamsandballerscontinues 😎

Clarke currently lives in her new home in Hampstead, London. She bought another luxurious home in Venice, LA in 2016 which cost her approximately $4.6 million. Emilia also has two rides to her name in a Cadillac Escalade which costs around $82k and a Toyota Prius Hybrid for $30k.

Emilia Clarke is also a pretty active figure on social media sites and has some of the largest followings for an actor. She uses Instagram a lot and goes by the handle emilia_clarke and has almost 18 million followers.