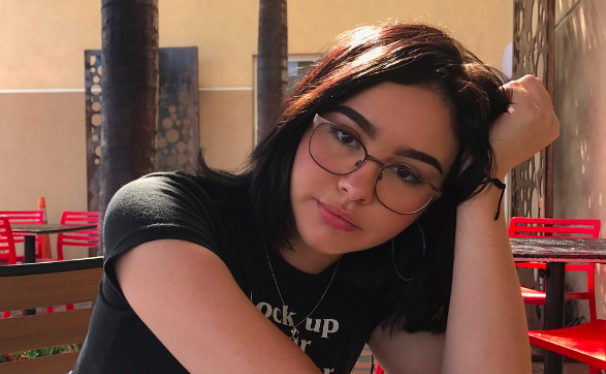 Celebrities are not only famous from the television or drama. But they can be also famous from different field like social media platforms.Likewise, Enjajaja has caught our interest who is internet sensational.

Enjajaja is a Youtuber who is famous for her makeup addiction. The channel has subscribers over 900,000 and views with 5.5 million. She was also popular on Vine. There are many young Youtubers like Yuya and Vanessa Lynn who features makeup tutorial including Enya.

Enjajaja was born on 22 January 1999 in Miami, Florida as Enya Umanzor. Enya is popular by the nickname ‘Enjajaja’ in media platforms. She was raised by her father. She has not shared the details of her mother in the social media. But she has said that she loves her father for being both father and mother. Further, she has two siblings: brother Donate and sister Sophia.

Umanzor has completed her basic education in Miami. Later, she has enrolled in the university in Miami. After being a freshman in college, she has busier academic work and tough time. In spite of her academic workload, she manages to make a video but less in number than before.

Umanzor is one of the famous internet personality on Youtube. Prior to YouTube, she was already popular fro the vine. She has joined Vine on 20 November 2013 and gained 500,000 followers. After removing the posting option from the Vine, viners began to move towards other social platforms.

So, the Viner Enjajaja began her journey on 23 May 2014 in YouTube. she upload her introductory video title “A pointless Video”. The video became hit and she gained a lot of fans. She featured the makeup tutorial videos. Her contents a fun way of applying makeup and also makes a serialized videos.

The teenager Youtuber sometimes are famous for their relationship on the media. However, Enya was also among the list. Her relationship became a hot topic on the internet. Although her relationship started with gossip later she confirmed it. And began to post her lovey-dovey relation with her boyfriend, Roy Blair. He is an upraising singer and songwriter.

Other than this there is no information about her involving on controverises and rumors. Since, she is busy maintaining her personal and professional life. Enya has to make videos for her fans. Besides that, she is focusing on her studies too.

Enya is a famous personality who has lot of admirer and millions of fans. Therefore, her net worth is expected to be very impressive. Even though her earning are not known yet. But it can be assumed to be over 100,000. However, due to her studies, she can’t give much time to her work.

Going through her social media, we found that she loves doing modeling. And also likes to wear a fashionable clothes. She seems to a very fun loving person. whenever she got time, she prefers to spend quality time with her family and boyfriend.

Being internet sensation, she is active in social media. But she does not have an official account on Instagram(@enjajaja). on Twitter(@en_​) having followers 679K.