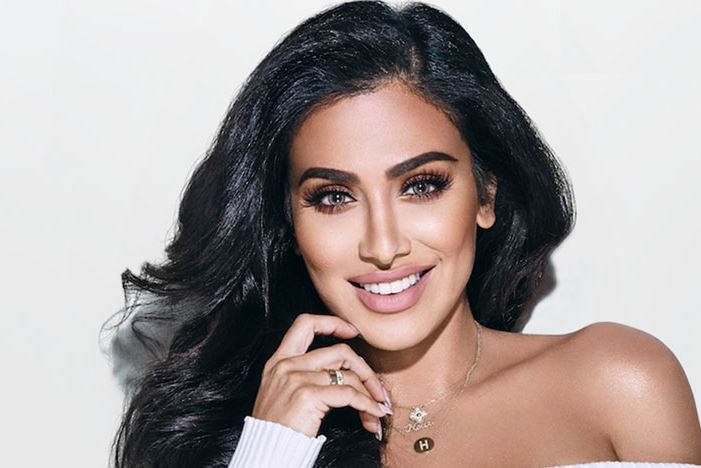 Huda Kattan is an Iraqi born American beauty and makeup artist who is known for her beauty and makeup videos on Instagram. In addition, she is also the founder of Huda Beauty which is a makeup franchise and beauty product supplies.

Huda has a massive online following and social media success. Her Instagram has around 25.8m followers, also ranked as one of the highest rated Instagram accounts with the most followers. Let’s find out the journey of Kattan towards her success. Read about Desi Perkins here.

Huda Kattan was born on October 2, 1983, in Oklahoma City, Oklahoma which actually makes her nationality an American. She was born to Iraqi parents as one of their four children. Later, Kattan moved to  Cookeville, Tennessee and then to Boston along with her family.  She attended the  University of Michigan–Dearborn majoring in Finance.

In the year 2006, she moved to Dubai with her family as her father got a job there. Likewise, Huda once again moved to Los Angeles to study makeup artistry. After which she received a job at Revlon of a makeup artist. In the year 2010, as advised by her sister Huda started a beauty blog “Huda Beauty” posting makeup tips and tutorials. Later in 2013, she found a cosmetic line named Huda beauty releasing fake eyelashes through Sephora. Her fake eyelashes were a hit and celebrities like Kim Kardashian famously wore them. Eventually, she released some other beauty products which became popular amongst the customers. On the other hand, her Instagram fame also contributed to her success.

In the year 2017, Kattan was named as number one on the “2017 Influencer Instagram Rich List”. Meanwhile, she also collected titles like  “ten most powerful influencers in the world of beauty” by Forbes magazine and “The 25 Most Influential People on the Internet” by Time magazine.

Huda Kattan’s personal life is equally perfect as her career. Talking about which, Huda married her husband Christopher Goncalo in the year 2008. She met her husband while she was just a teenager and they fell in love. The teenage romance proved out to be strong and the couple married in the year 2008. The couple has a daughter together.

Huda Kattan is now one of the most successful beauty moguls across America and the globe as well. This internet makeup celebrity has not only influenced millions of people but also established an empire through her cosmetic line. As being ranked number one in the 2017 Influencer Instagram Rich List, Huda gets $18,000 per each post of sponsored content. Her net worth estimation is $4.5 million.

Huda Kattan is active on social media sites like the Instagram page where she currently has 25.8m followers. In addition, she also has a Facebook page. However, her social media sites are handled by her sister. To know more things about her click here.