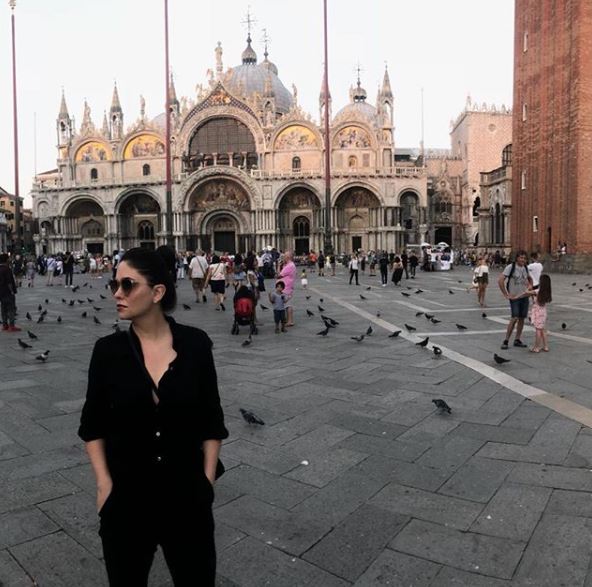 Jodi Lyn O’Keefe is an actress from America who is famous for her portraying Gretchen Morgan in the TV series “Prison Break”. She is an incredibly beautiful actress and a model who has been active in the entertainment industry for over 20 years. During this long career, she has made appearances on series like “The Vampire Diaries”, “Prison Break”, etc.

Jodi uses her beauty and her performance to capture the hearts of her many fans. O’Keefe, throughout the years, has showcased her talents in this field and people can not seem to get enough of this amazing lady. Let us now get to know more about this beautiful actress.

#fbf to a much more glamorous me at a #tomfordbeauty event in Beverly Hills. Today is all gothic makeup and fake blood in preparation HALLOWEEN!

Jodi Lyn O’Keefe was born on the 10th of October in 1978. She was born in Cliffwood Beach in New Jersey as the youngest of three children. Jodi belongs to a mixed ethnicity that is comprised of Czech, Polish, Irish, and Swedish. Her mother Noreen is a homemaker and her father Jack O’Keefe is a director of labor relations for Merck. She has two older sisters that go by the names Jenna and Heather.

My cousin just sent me this photo of when we were kids. I still love a roller coaster. She still hates em.

O’Keefe, from a very young age, was exceptionally beautiful. Because of that very reason, she became a model at the age of 8 after years of encouragement of her older sisters. She then did some modeling work for Gitano Jeans and DreamPhone and got to learn to ballet.

Taking a walk down memory lane. I'm the really short one. With my sister and my cousin.

During her mid-teens, O’Keefe went to Saint John Vianney School in New Jersey but left her education to star on the soap opera Another World. For the series, she got the role of Maggie Cory.

After finding fame in her early years, the beautiful Jodi began catching the eyes of everyone in the entertainment industry. At 17, Jodi got a role of Cassidy Bridges on Nash Bridges. However, her debut role came in 1998 when she played for the movie Halloween H20: 20 Years Later. After her performance in the movie, she starred in movies like, “Whatever It Takes”, “Devil in the Flesh 2”, and “The Crow: Salvation”.

In recent years, she was cast for one of the most-watched TV series, Prison Break. She was part of the show for its third and fourth seasons. For O’Keefe the role was extremely challenging because her character characteristics were exactly opposite to that of hers in a ‘badass’ way.

She was also cast in the VH1’s TV series Hit the Floor and Merry ExMas in 2014. She then appeared in a recurring role for the character Jo in the 6th season of The Vampire Diaries alongside Allison Scagliotti.

Jodi previously was in a relationship with John Cusack for over six years. Cusack is an American actor, producer, and a screenwriter. They began dating in 2003 and later split up due to some unfortunate circumstance. O’Keefe gave her absolute best in the relationship but according to the reports, John did not want to settle down.

Throughout the years, Jodi has been together with some of the most famous names in the industry in Jamie Gomez, Don Johnson and Al Santos. And currently, she has found a new boyfriend for herself in the Douglas Little. Douglas is a master of storytelling who specializes in the interpretation and translation of corporate identity into advertising. The couple is still together and we wish them the very best.

Jodi has been in the entertainment industry for decades now. She started her career at the age of 17 and has come a long way since that period. Having been in the business for over 20 years, she knows all the ins and outs of it. She also has been involving herself with her own clothing line Queen George Clothing. She started this project in 2011 and later added a jewelry line. To sum all of her work up, her net worth as of 2018 is somewhere around $5 million.

Lyn is also available on various social media platforms. She is more active on Instagram where she goes by the handle @jodilok and has over 390k followers. Jodi has been posting pictures that showcase her life and work. She also posts pictures of her three French bulldogs George and Vivian and Moses.