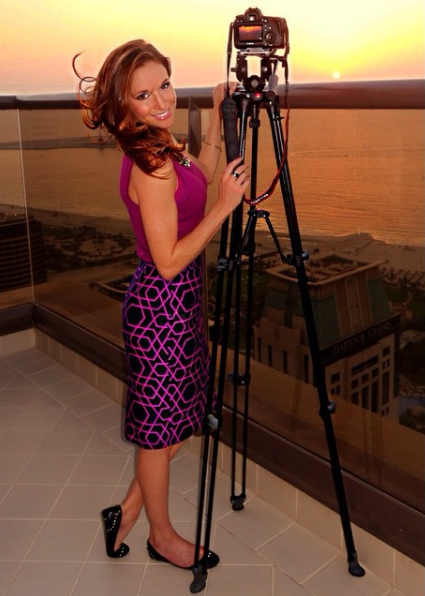 Kristin Fisher is an American journalist who is famous for her work on the Fox News Network. This news anchor is quite well known for her unique style, beauty, and dedication towards her work. The young journalist, throughout the years, has been able to cover some of the most important stories which have now helped her get to the peak of her career.

Apart from her career in news reporting, Kristin is also famous for founding Field Mouse Films. It is a limited liability company which came into operation in 2015. The video production company has been making short films which resemble documentaries and provide them to news organizations and other corporate clients. Let us now get to know more about this multi-talented personality.

dammit Pele, smile or else I'll squeeze it out of you

Kristin Fisher was born on the 29th of July, 1983 in Houston, Texas. The Texan was born to parents Dr. Anna L. Fisher and Dr. William F. Fisher. Being the residents of Texas, the home of NASA Mission Control Center, both her parents are former astronauts for the agency. The two are now divorced now but they both worked as physicians and moreover, Anna was also a chemist and a management astronaut. Evidently, Kristin had big shoes to fill.

Happy Father's Day to the man who always encouraged me to live on the wild side: Messy spaghetti parties ✔️Midnight jet-ski rides (without Mom's permission) ✔️Epic all-day horseback rides ✔️Climbing Mount Rainier ✔️Hey Dad, can I go live outside on a glacier in Alaska for the summer? Sure kid! ✔️Family vacations to Burning Man ✔️Life has never been dull with @scuffytugboat for a Dad. Love you 😘

Coming to her academics, Kristin has a bachelor’s degree in Journalism from Boston University’s College of Communications. She graduated from the reputed institution in 2005 and later went on to attend the University of Virginia for further education.

Kristin began working in the field of journalism even before she graduated in 2005. She first started her career working for ABC Network in 2004. Next, in 2005, she went on to KJCT News 8 where she was the anchor and reporter.

I don’t know why I’m smiling. I blame a faulty buzzer and obscure questions. But at least I wore a sling for solidarity. @griffjenkins #finalexam

Despite starting out as a reporter, Fisher had a knack for film production and feature documentary editing. She began doing just that in 2007 when she got a job at the Current TV. She was a freelance contributor to the company and worked for only 3 months. Whilst working for the Current TV, she got to make short feature films on Hillary Clinton and Bryan Chatfield‘s father in law, Mike Huckabee.

Kristin is also famous for her work during the 2008 presidential campaign. Her work and dedication later resulted in an Emmy Award in 2010. It was for her weekly segments on heroes in Washington. Many also remember her amazing and downright gutsy role while reporting stories from Hurricanes Sandy and Irene.

Fisher has been heavily influenced by her parents and has a soft spot for space and astrophysics. Throughout her career, Kristin has covered various space-related events like the launches of space-shuttles and the Columbia disaster. Currently, Fisher stands tall as a prominent journalist for FOX News. She is also the founder of Mouse Films.

Looking at the personal aspects of Kristen’s life, she is married to Walker Harrison Forehand. She first met her husband in Athens in 2003 where they were both enrolled for a six-week study program. Now, Walker is the Chartered Financial Analyst for Promontory Financial Group. He is also the associate and private equity investment analyst at Hovde Private Equity Advisors.

The two began dating right after spending some time at the study abroad program. They later got married in March of 2011. The wedding took place at a Church in Washington D.C. The couple has now welcomed a daughter Clara Fisher who was born on the 19th of December, 2017.

The 35-year-old journalist is still at the peak of her career. Fisher has a lot to offer to the world of journalism and is doing quite well as a correspondent for FOX News. According to reports, she makes $50k per year which is an average salary for an employee of Fox News. She also has a net worth of $1 million and the figures are sure to rise.

Every day is #nationaldogday when you're the #pelepup. She rides like this on the reg (and yes, she is wearing a seatbelt)

Fisher also involves herself with various charitable causes and has been leading different social projects. She is a big believer in helping people and does not shy away when she gets the chance.

This news personality is also active in social media. She has been famously using platforms like Twitter and Instagram with a massive fan following. She likes to constantly interact with her fans and provide them with her opinions on politics and other issues.