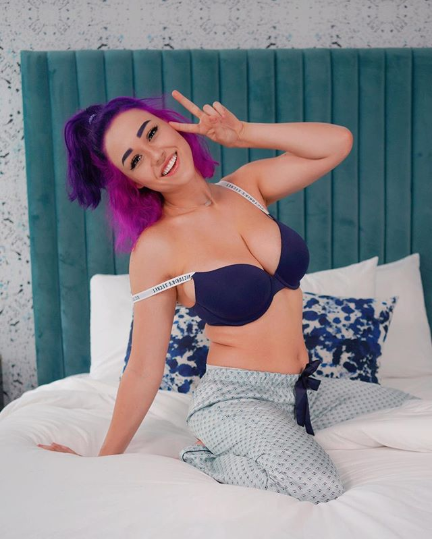 Sabrina Nichole is originally from Dallas Texas, USA and was born on January 30, 1995. She has bullied nerd in her high-school who didn’t consider herself pretty. However, she turned herself into one of the hottest models from the Playboy magazine.

She is a blonde nude model with curves. Although Sabrina may not have any special talents she considers herself as a friendly, understanding person and loves being called a “model” has built up her confidence.

Sabrina had a disturbed childhood. Even though she wasn’t actually a troubled kid but had to face a lot of bullies as a child which eventually made her even stronger. Sabrina was a simple girl and was very focused on her studies as a student. Accordingly, her routine was pretty reserved; she wouldn’t do much except for reading the manga, watching anime and playing MMORPGs like “World of Warcraft”.

Sabrina Nichole: Journey to her Career

Talking about Sabrina’s profession initially she was a waitress in a small restaurant at Dallas. On her days of waitressing she decided to wear bodysuit at her work on a season of “bikini week”. That’s when the playboy magazine photographer approached her.  Sabrina didn’t actually believe him until she got to see his outstanding work (photographs). Finally agreeing to take a few shots for the magazine, she started her playboy girl journey at the end of 2014. Sabrina also slowly developed her interest in the internet, next she won the cybergirl of the month is April 1015.

There is very less information regarding Sabrina’s relationship status. However, some tabloid sites have listed her relationship as being currently single. She believes in a person’s inner beauty rather than the appearance and is looking for the right person in her life.

Sabrina, having a tall and angular body has her chest size of 32, waist 25 and hips 35 inches. Her height is 5 ft 8 inches and she weighs 58 kg on the scale.

As Sabrina won the title of “cybergirl of the month”, she has been pretty active in social media since then. Accompanied by 90k followers on her unverified Instagram account and 10.6k followers on Twitter with low following ratio she is continuing to entertain her fan followers. Going through her social sites it appears she’s too busy with her photo-shoots. Adding to this, Sabrina is quite fond of dogs.